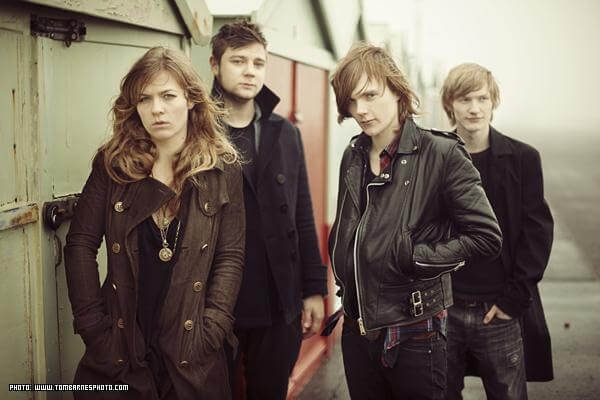 Kill it Kid Kicks it with College Mag

Eillie AnzilottiJul 30, 2011
Home » Latest Posts » Kill it Kid Kicks it with College Mag
FacebookTweet
Formed in 2008, Kill It Kid burst onto the music scene from Bath, England. The four-person band, made up of Chris Turpin (Guitar, Vocals), Stephanie Ward (Piano, Vocals), Dom Kozubik (Bass) and Marc Jones (Drums, Percussion), has received widespread recognition as one of the most promising up-and-comers of the past few years, after their first self-titled album was released in 2009. Stephanie chatted with College Magazine about the band, its sound and their experiences playing music together.
1. How did the band get its start?
We were all studying in Bath and met through various musical collaborations. Both Marc (drums) and I saw Chris play at an open mic and fell in love with what he was doing. Our bassist Dom we met in Manchester when he was doing our sound for a gig. He had a Zeppelin tattoo so we liked him.

2. What are your major influences?
We all share a love of blues in some form or another. Chris is really into the prewar blues —Blind Willy McTell, Son house, Lead Belly, etc.  I love all the Chess Records ERA artists like Muddy Waters and Etta James, and then we all share a love for modern bands such as The Dead Weather, Black Keys and BRMC. Our drummer Marc is also really influenced by bands like Queens of Stone Age, Foo Fighters and heavier bands. There are so many bands I could name but the majority of the stuff we are all inspired by always seems come from the blues!
3. How would you describe your sound?
Our sound is like garage blues rock.
4. What’s your favorite song off Kill it Kid?
Chris writes so many great songs! My personal favourite is "Lord hear me now," which is an acoustic track.
5. Your new album, Feet Fall Heavy, is due out in September. Anything in particular fans should look out for on the new album? Any changes from the first release?
Feet Fall Heavy is an album we all are very proud of. When we made the first record we were young and had only been together a few months. This time round we had developed as band, we had been touring for two years and basically just felt more confident in our music. We recorded most of the tracks live in a studio in Shoreditch, London.The last record was catagorised alongside the folk revival happening at the time and we always felt that — although we do draw influences from some folk music — it is not at all where we fit as a band. We no longer have a violin, and we are back to the more bluesy roots that we all love!
6. What’s the favorite show you’ve ever played?
Oooh there are a few. I love playing to our home crowds in Bath. Aside from that, maybe a festival called "Hop Farm" last year. The festival line-up was amazing — Dylan headlined! We were on in the afternoon but still there were nearly 2,500 people in the tent and lots of them singing along. It was an amazing day and to play amongst such amazing acts was such a wonderful experience.
7. Favorite non-US place to travel?
We played a beautiful festival in Norway last year. The landscape was so gorgeous and the people treat you like kings!

Find schools
8. Favorite U.S. city?
I’d Have to say Austin. We have a lot of friends there and the city`s general vibe is amazing.
9. Any words of advice for young musicians or college students?
You`ve got to be persistent and be able to take a few knocks being a musician! I think it’s important to make sure the music can stand on its own aside from everything else. All the hype, image etc. means nothings without a well-crafted song!
Listen to Kill It Kid's unique sound here:
FacebookTweet
Life