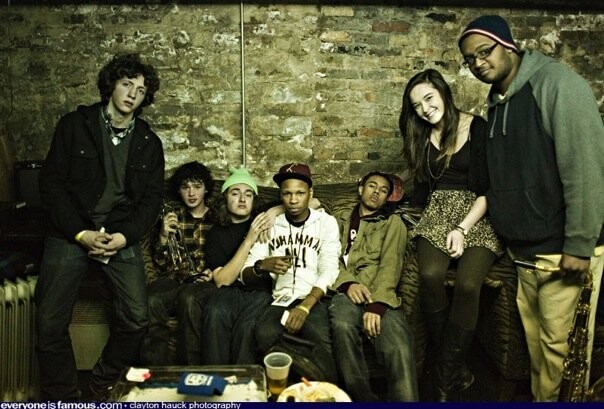 Kids These Days Is Killing It

In a music scene where auto-tune and cookie cutter pop stars rule, seven kids from Chicago bring a welcome change. With horns, a rapper, a blues-rock trio and a female singer, Kids These Days is in a genre of their own. The band, which features Macie Stewart on vocals and keys, Nico Segal on trumpet, J.P. Floyd on trombone, Lane Beckstrom on Bass, Greg Landfair Jr. on drums, Liam Cunningham on guitar and vocals, and Vic Mensa on rap vocals, is blowing up and for good reason.

Rapper Vic Mensa gave us the goods on all things Kids These Days.

The band, whose sounds Mensa describes as “traphouse rock,” has been together since high school when they beat out 150 bands to win November 2009’s Congress Theater’s Next Big Thing Battle of the Bands. Since then, the band has scored 14,000 Facebook fans and performed at big time music festivals including South by Southwest and Lollapalooza.

“15,000 people. It was live. People were coming out with their toes bleeding. Wild [stuff] was going on, it was crazy and just to be in our home city made it even crazier,” said Mensa about the band’s Lollapalooza experience.

But the band doesn’t just hit up music festivals; it’s touring all the time. “Playing shows performing is fun. To be in different cities and perform with new crowds that have never heard us before is dope,” said Mensa.

So what does a guy like Mensa, whose rap skills rival some of the best and who lives by the motto “Save money. Still alive,” have in his MP3 player?  Quite the eclectic mix of course, which includes Outkast, James Blake, the Beastie Boys, Eight Balling MJG, Twista, and Deangelo.

Mensa also had some great advice for aspiring musicians. “Be yourself. Imitation is how we learn and develop, be creative in what you imitate. Don’t just model yourself after whatever’s popular at the time.”

And those are words to live by, as the band who has already shown off their unique sound with its first project “Hard Times” and original vision with music videos like “Clear Eyes” (see below) prepares to launch a new mixtape with more creative content appropriately titled “Trap House Rock.”

In the mean time, the band is touring all over the country, so make sure to check them out, or as Mensa says “Come see Kids These Days in a city near you. Swag swag!”

Previous Post:Pick-Up Tips From…The “Out and Proud”
Next Post:Yo Professor, Not Gonna Make it to Class…