Monday marked a momentous occasion for Major League Baseball, as the Baseball Writers Association of America and the Veterans Committee voted Barry Larkin into the Hall of Fame. The outstanding Reds shortstop undoubtedly deserves the recognition for a great career, but his election comes with minimal controversy.

What Larkin’s election did is get me to thinking about next years’ class – one that is as full of talent as it is full of controversy. Names like Barry Bonds, Sammy Sosa, Roger Clemens and Curt Schilling are eligible to be voted in then, but should they be?

Let’s start at the top of the list: Barry Bonds. If the Hall of Fame were a mere measure of simply talent, I cannot think of a player more deserving of a spot in Cooperstown. But the Hall is much more than that (see: Rose, Pete). I just do not see any possible way Bonds gets in any time soon.

Bonds simply comes with too much baggage. In the court of public opinion, all that matters is that Bonds juiced time and time again. On top of that, Bonds also was found guilty of obstruction of justice last year and he could face more charges in the future. The man was a machine – I will give him that – but there is no way this generation of baseball writers will vote him in, plain and simple.

Another great player, Sosa, will not get in the Hall of Fame anytime soon. Sosa was shrouded by almost as much controversy as Bonds. There is the corked bat scandal, for one – a blatant attempt at cheating. Although Sosa denies it, any baseball player will tell you that you know exactly how much your bat weighs, and if a bat was lighter and you picked it up, you would know.

Sosa’s name is also synonymous with the steroid era in baseball, just as much as Mark McGwire or Bonds. McGwire has been Hall of Fame-eligible for a few years now and is not getting nearly enough votes to be enshrined. That tells us a lot about how they are going to vote for his counterpart to the 1998 home run race that captured a nation. With Sosa, much like Bonds, the talent is there but everything else is not. 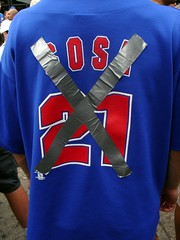 Perhaps the most dominating player in next year’s list of eligible players was Clemens, the fireballer who fooled hitters for the better part of three decades. Another player who was named in both the Mitchell Report and called out by Jose Canseco, Clemens’ name goes hand in hand with steroids. Even Clemens’ former trainer, Brian McNamee, has called Clemens out.

Once again, Clemens’ name will live in infamy around baseball circles, which is too bad for a player who had this much talent. I give Clemens a one percent chance of ever making it into the Hall.

Schilling may be the most interesting of the eligible names for 2013 because, well, he is not a definite “no” for next year. While his name does not carry the bad connotations of Bonds and Clemens, he is not in the clear of the steroid era yet. He is another guy who had incredible talent and has the awards to go with it.

But beyond the steroid allegations, he had many disputes with players, coaches and, most importantly for his Hall of Fame chances, the media. His famous “bloody sock” game in the World Series may be a sham, (at least according to Gary Thorne). All in all, I believe that Schilling eventually gets in … just not next year.

When it comes down to it, the Baseball Hall of Fame Class of 2013 will be a two-man show. Craig Biggio and Mike Piazza are two players that deserve to be elected into Hall of Fame. Both Biggio and Piazza had prolonged success, and they stand out among a class for doing it the right way.

Previous Post:Save ‘Community’! Why You Should Be Watching
Next Post:Your Calendar for Landing a Job