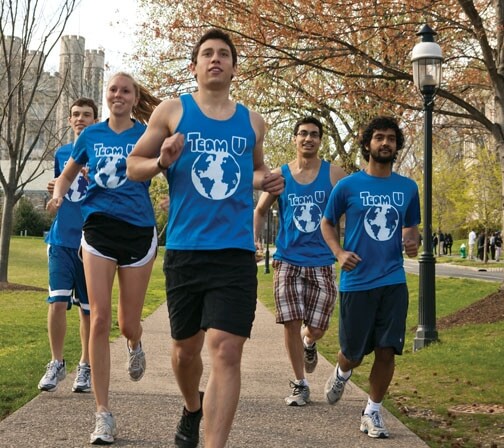 Joe Benun Wants YOU To Run A Marathon

When it comes to New Year’s resolutions most people opt for the “I’m going to get in shape” route. It has earned the #1 spot on the list of “Fastest Broken New Year’s Resolution Ever,” But this year is going to be different, at least if Princeton University sophomore Joe Benun has anything to say about it.

Benun’s athletic abilities put most of ours to shame – even those of us who have actually been hitting the gym this year. He could run six miles at age eight, he ran his first half-marathon at age 14 and was the youngest competitor in the Switzerland Ironman in Zurich at age 18.

If you feel like an even bigger couch potato than you thought before, don’t. Running does not need to be the daunting and impossible task it is made out to be.  As Benun describes it, “Running itself is just moving your legs in a repetitive pattern.”

Can’t argue with that! But the biggest motivator for getting up early and tying up those laces: having a cause to run for. With Team U, a fundraising marathon team based at Princeton, Benun does just that.

Benun founded Team U during his freshman year. The organization encourages people of all shapes and sizes, runners and non-runners alike to participate in half marathons — if you’re rusty in math, that’s 13.1 miles.

“To tell someone ‘you can do this’ and them having extreme doubt in you,” said Benun, “I wonder sometimes if I’m being reasonable.”

But with a 100 percent success rate, the challenge looks attainable.  Benun said that there are few people who are physically incapable of running a marathon – they just need a reason to go out and do it.

In Team U’s first year, 75 people registered to run in the Unite Half Marathon in New Brunswick, NJ. A lot of these people were first time marathon runners.

Team U has a three-pronged approach: running, fundraising, and spreading awareness. Benun says running for a cause makes the experience more powerful. You’re not just running for yourself but for a larger purpose.

Team U raises money for Shoe4Africa, a charity that started out sending shoes to African children to prevent hookworm and has expanded to other causes. The charity recently built a hospital in Kenya and actor Hugh Jackman has been known to work with them. While Team U is interested in expanding to other charities, this is the only one the team has worked with thus far.

Given the successes of Team U at Princeton, Benun is looking to expand to other universities; he’s even gotten interest from Canada! He and his fellow organizers at Team U are trying to make organization as scalable as possible so it can be easily replicated in other schools with vastly different student bodies and geographic locations.

Benun’s message to college students is to keep these four things in mind:

2. Realizing your own potential and helping others realize their potential can be one of the most powerful experiences

People interested in starting a Team U chapter at their own college or university can get more information here.