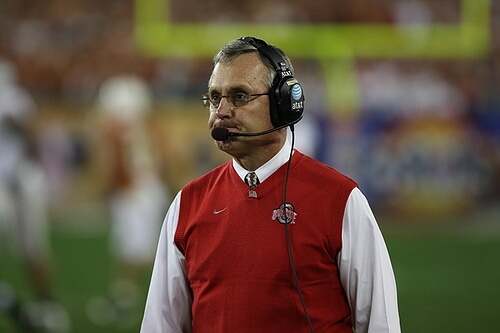 Jim Tressel is making a move to the NFL. The Indianapolis Colts hired the disgraced former Ohio State coach as a game day consultant. Tressel will sit in the booth and help the coaching staff determine when to challenge the officials’ calls

Colts coach, Jim Caldwell said the game day consultant is a position he’s wanted to integrate into the team for a few years and what better way to fill it than with an old friend. Caldwell and Tressel have a long-standing relationship dating back to the '80s when both were coaching college quarterbacks. The Colts organization has also gotten to know Tressel during their pre-draft scout work. Indianapolis drafted multiple Buckeyes during the past 10 years while Tressel was coaching. These players include defensive tackle Quinn Pitcock, tight end Ben Hartsock, safety Mike Doss and receivers Roy Hall and Anthony Gonzalez.

After resigning in May, Tressel was actively seeking employment until he was recently spotted at practices in Indianapolis. However, his job with the Colts will be limited. The ex-Buckeye will only work on game days from the coaches’ booth, “as a replay consultant so the guys up in the box can concentrate strictly on their position,” said Caldwell.

There is no denying Tressel’s ability as a coach. He went 94-22 at OSU with a national title in 2002, but the downgrade to a replay consultant has got to rock his ego. Tressel basically had job created for him by his old buddy because he wasn’t getting work anywhere else. Tough to do when your resignation is forced amidst a controversial cover-up with the NCAA. Terrelle Pryor tried to escape NCAA wrath by heading to the NFL but commissioner Roger Goodell suspended him five games for his past indiscretions. Now, the Colts decided to beat Goodell to the punch with Tressel, suspending him until to the seventh game of the season due to his part in the Buckeye scandal.

Indianapolis broke its standard procedure of hiring internally by employing Tressel. Lets just hope this hire works out and his past transgressions stay in the past and his real talent for coaching football can shine. Even if it is just through replays.