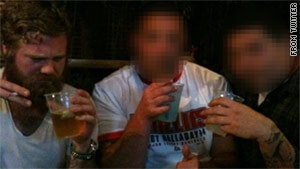 Ryan Dunn, a man who has lived a life of risky and painful stunts as one of the stars of MTV’s successful film franchise “Jackass,” was killed on Monday in a fiery single-car accident, CNN reports. An unidentified passenger was also killed.

Police reported to CNN that Dunn was operating a 2007 Porsche 911 GT3, registered in his name. It was found 35 miles out of Philadelphia, along Pennsylvania’s State Route 322. The vehicle was “off the road and in the woods … fully engulfed in flames,” at 2:30 a.m.

Though the investigation is in its preliminary stages police believe that speed could have contributed to the cause of the accident.

Jim O’Brien, manager of Barnaby’s in West Chester, Pennsylvania confirmed that Dunn had been drinking at his bar Sunday night but claims that Dunn “didn’t seem to be intoxicated at the time he left,” and that Dunn, a regular customer, “was not a hardcore drinker."

Dunn also tweeted a photo of himself and two unidentified friends drinking at Barnaby’s. O’Brien has confirmed that the photo was taken at the bar the night of the accident.

“He was a valuable person in our community and his death is a tragedy," O'Brien told CNN. "He will be missed.”

Beyond his work on “Jackass”, Dunn also was working on “Proving Ground,” a new nine-episode series that he would host on the G4 cable network, which will be  "off the schedule … until we discuss next steps," G4 told EW.com

Fans and friends of the 34-year-old, redheaded prankster have been posting their condolences to Dunn through social media outlets such as Facebook and Twitter. A “R.I.P. Ryan Dunn 20/06/2011” page was created with over one million people liking the page on Facebook as of 11:30 p.m. EST on the Monday. Ryan Dunn is trending on Twitter with several celebrity friends of Dunn tweeting messages to their lost and beloved friend.

“Today I lost my brother Ryan Dunn. My heart goes out to his family and his beloved Angie. RIP Ryan, I love you buddy.”

-Jonny Knoxville, actor and comedian who starred in “Jackass” with Dunn.

“I don't know what to say, except I love Ryan Dunn and I'm really going to miss him.”

“We're deeply saddened by the passing of a member of the MTV family, Ryan Dunn. Our hearts and thoughts are with his friends and family.”

"RIP ryan dunn. You were an amazing guy and you were cut way to short. Enjoyed the times we had. My heart goes out to his family and friends"