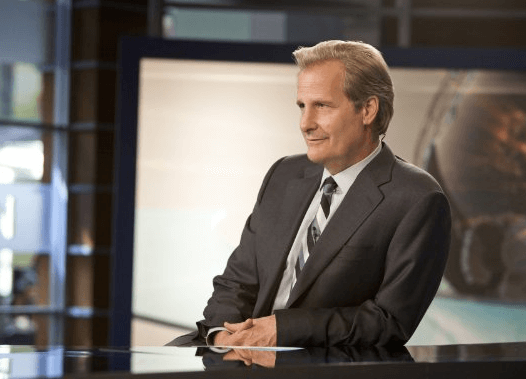 For those of you who did not watch the show, newsman Will (Jeff Daniels) and producer Mackenzie (Emily Mortimer) decide to dream the impossible dream. They present audiences with the non-sensationalist, objective and informative “News Night” after Will verbally attacks “sorority girl” at Northwestern University for asking “What makes America the greatest country in the world?” To which Mackenzie, cringing at Will’s outburst, holds up a sign in the crowd: “It’s not. But it can be.” The season ends, “sorority girl” is the newest intern and suddenly her questions looks way less stupid.

Director Aaron Sorkin analyzes real-time coverage of events like the reactionary Tea Party, the BP oil spill, raising the debt ceiling and the presidential debate over the course of ten episodes. His point is clear: ditch the Weiner business, question radical movements and respect the indisputable value of professional reporting.

Basically: wake the hell up! American media can, and should, do better.

And that can, and should, happen at the hands of young 20-somethings guided by solid mentorship.

Grabbed your attention yet?

Truth is, I’m bored with comparing Fox and MSNBC formats to the partisan papers of the 1830s in my classes. I’m annoyed that people keep whining about the “de-professionalization” of journalism. Let’s get real for a minute. The ignorant, partisan nut-job blogger who types some lame response to what CBS, Time Magazine and WSJ produce that week is not challenging those organizations’ credibility. The informed, politically-motivated wit you choose to follow on your Google Reader isn’t either. In fact, she’s showcasing what good reporting incites, and chances are she’s following CNN, the Times or The Atlantic.

We’re also the kids who can make the choice to report accurately, tweet objective articles frequently, blog against radical crazies and pitch the less sensational, more substantive story idea to our future bosses.

Excuse me. The 20-somethings.

If you turn on The Newsroom, you’ll see Maggie, Jim, Sloan, and Neil relying on the Internet for information, but referencing Will and Mackenzie for perspective. Professional norms aren’t defeated; they just need to adjusted to the new tech, our tech.

They’re haven’t yet. But they will soon.

And maybe when we follow through on Sorkin’s point, he’ll let Maggie and Jim get together. A fan can dream that impossible dream.