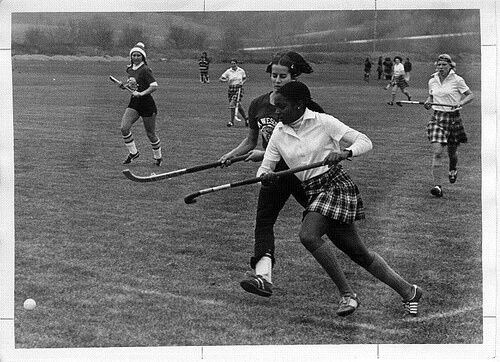 Is this Lacrosse?: The Struggle to Get Out of the Field Hockey Cellar

Keith LevinskyJul 2, 2011
Home » Latest Posts » Is this Lacrosse?: The Struggle to Get Out of the Field Hockey Cellar
FacebookTweet

The Pittsburgh Pirates have suffered through 18 consecutive losing seasons. On June 22, the Pirates held .500 record of 37-37.

Imagine if these teams played a lesser-known sport, received almost no fan support, and had to satisfy academic standards.  Their mountains to climb would be a little steeper.

Those are some of the challenges for field hockey head coaches’ Zowie Tucker of The College of the Holy Cross and Oliva Netzler of Robert Morris University. Tucker’s Crusaders went 0-17 last year while Netzler’s Colonials finished 4-14.  Both coaches do not really want to focus on these results, but more on their team’s performances and improvements.

“Each year I think we are getting better.  I don’t think our results are reflecting it yet,” Netzler said.

“I don’t focus so much on not winning, [more on] our performances and how we are improving as a team and developing our ball passing and our defensive awareness,” Tucker commented.

Tucker and Netzler are truly attempting to build their programs from the bottom up.  Tucker is in her second year as head coach at a program that has consistently posted losing records in the past.

“My whole vision was to change the culture and to really make the kids believe that they can play good hockey and kind of build on a strong foundation,” Tucker.

For Coach Netzler, it is not about changing the program’s outlook, but simply forming an outlook.  Robert Morris field hockey began in 2009. So far the biggest challenge has been the team’s lack of experience.

“Being a young team, that is really, really hard because each year you have new girls bringing in a new precedent,” Netzler said.  “I think you need almost to have fifteen years of that before you have something set in stone.”

Not only are these coaches battling brief or unsuccessful histories, but they are also attempting to find success in a sport that does not have that much traction in the United States.  As Coach Tucker recognized, field hockey is not always the first choice for American girls.

“It is a challenge to get the best athletes to play field hockey, because there are so many options in this country for female athletes in general,” Tucker said.

The sport is also not the first option in the minds of most spectators as well.  Normally, fans at the games frequently compare field hockey to other sports.

“I think it is hard to explain that we are not lacrosse.  We are a completely different sport,” Netzler said. “It is something that you kind of get used to and explain it constantly.”

“I try to make people aware of the game of field hockey and how exciting it is.  It is always good to introduce people to it and compare it to ice hockey and soccer,” Tucker said.

There is hope, though, for field hockey in general and for these schools.  Tucker believes that the U.S. national field hockey team for the Olympics could help spur popularity.

“[The American national team] will have the ability to play at a very high standard that will almost give us the visibility and help the college programs, high school programs, and the club programs,” Tucker said.  “When you see the team go to the next level in the Olympics, that will attract more athletes to get involved in the sport because they can compete at the highest level possible.”

In their own programs, Tucker is looking forward to the addition of her freshmen recruits.

“I am really excited about what they are able to bring,” said Tucker about her new freshmen.  Tucker has brought in a solid new goalkeeper and three players who she believes could start on her team right away.  Netzler is also looking forward to her freshmen’s future contributions.

“I am really optimistic. I think we have a very strong class coming in. I think they are all really committed,” Netzler said.

Tucker is excited over new assistant coach, Kadi Sickel, and the addition of Astroturf to her team’s field.

“She is going to bring a lot to our team, not just her leadership, but her knowledge of the game and the high standard that she has played at,” Tucker said of Sickel.

With both of these coaches’ recent improvements, don’t anticipate for them to stay down much longer, especially not 18 years.