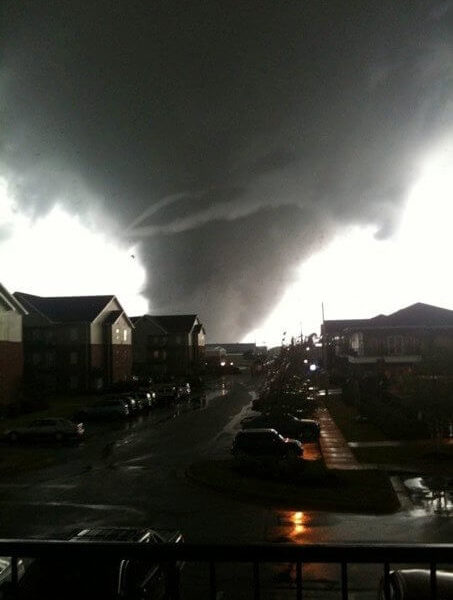 In the Wake of the Storm

Kerry WeirMay 3, 2011
Home » Latest Posts » In the Wake of the Storm
FacebookTweet

A University of Alabama student's account of the tornado that devastated Tuscaloosa, Ala., last week.

The sun shone down on Tuscaloosa like any other hot spring day, banishing all threats of an impending afternoon thunderstorm. The cloudless sky extended forth across the town, inviting students outdoors to enjoy the last days of the dead week before exams and graduation.

But looking for a way to spend time on the lazy Wednesday, I decided to track the threatening thunderstorm looming in the western states. The night before I had watched it move in from the west and break into small clumps of storms.

Wednesday, 3 p.m.: The storms had not arrived as the hourly predictions said it would.  Like the Tuscaloosa sky, I dismissed the idea of an imminent storm.

4 p.m.: The storm predictions persisted, but with new warnings of severe tornadoes. I immediately called my friends and insisted they retreat to somewhere safer than their off-campus wooden house. But like most of the students that day, they insisted on staying and said, “It won’t come. It never does.”

I anxiously waited in my sorority house.  My sorority’s housemother dragged me out of my bedroom to wait with my sisters; we gathered in the dining area and huddled around a small radio as we listened to the storm tracker. Within 30 minutes, a tornado touched down. The radio announcer said it was “flirting” with the ground. Three minutes later, a confirmed tornado—a mile wide with 180 mph winds—touched down in downtown Tuscaloosa. I texted my friends again to rush to shelter, but the phone signals had been shut out.

The storm brought sheets of sideways rain and deep rumbles of thunder that shuddered the old foundations of the house. Curiosity drove us to the windows to watch for the tornado headed directly towards us, and as we looked outside the radio narrated the scene:  “15 minutes from Bryant Denny Stadium…7minutes…4 minutes…3 minutes…”

With our faces pressed against the glass panes, we watched with horrified eyes as the funnel cut through power lines, sending up bright flashes of light as the wires snapped and fell to the ground. Then the beast then turned away from my sorority house and toward 15th Street: Just south of campus, only a football field or two away from me.

Panicked and shocked, we ran to the bathroom, unsure of the tornado’s choice of path. We came out of hiding after several minutes passed with no attack. Those who still had cell service were flooded with text messages and calls from people outside of the house asking us in Phi Mu, “Did you hear? 15th Street is flattened.”

As if by reflex, I called my friends who live near the street.  After about 20 attempts at getting the call to go through, Caroline answered through a foggy haze of disbelief. Her voice crackled through the bad reception on the other end of the phone.  “We’re fine,” she said.   “We’re alive. It hit the other side of the tracks.”

Anxious to see what the storm had done to our town, we went to survey the damage without a thought of another tornado. I looked with astonishment at the flattened battle zone that Tuscaloosa had turned into as I walked down 15th Street. The once bustling and well-developed street now looked more like a pile of toothpicks. Fallen wires, horizontal trees and rubble pointed in the direction of the still moving tornado. Storefront and restaurant windows had been blown out. Piles of debris that I once knew as buildings were now unrecognizable and damaged beyond repair.

“The proportion of the tornado has ripped the soul out of the Tuscaloosa community and the hearts out of its students,” my mother said in a Facebook post after the storm.

11 p.m.: I received word that my friend Ashley was missing, but was told that nothing could be done until morning. I woke at 6 a.m. after a restless night’s sleep, determined to find her. A couple of my friends and I wandered along the destroyed streets of Tuscaloosa in search of bodies—people alive or dead, anything and anyone.

8:45 a.m., Thursday: My friend Hayes got a phone call. Ashley’s body had been found that morning, thrown 100 yards from her boyfriend’s apartment.

10 a.m.: It seemed like the entire university was out on the streets, aiding those who lost everything and salvaging what remained. Some students on bikes pedaled along the streets and handed out cold, clean water. A tormented town exposed its bleeding heart and tenacious spirit.

It wasn’t until later that we discovered that we had survived the second deadliest tornado in U.S. history, spanning 360 miles and never parting from the ground.

When I finally got a moment to rest and think about what happened, my heart competed with sadness over Ashley and Tuscaloosa. Ashley was a 22-year-old economics major, set to graduate a week before the tornado struck. She was vivacious, loving and determined. She had goals, spirit and an enormous heart. She was the strongest girl I have ever met and the last person anyone would expect to let a tornado tear her down. This story is dedicated to her—for being strong, like the city of Tuscaloosa that she loved so much. May you always watch over us, Ashley, and share with us your strength.

Previous Post:What To Do When There’s Nothing To Do
Next Post:Pick-Up Tips From… The Athlete