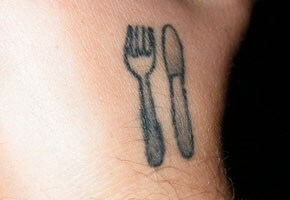 I’ve sat in the tattoo shop for over 55 hours being pricked and prodded with needles and transforming my body into a work of art. I’ve commemorated loved ones and portrayed who I am to outsiders through the images on my body.

I got my first tattoo in an unconventional way. I was 17 and my close friend had just committed suicide, I wanted to do something to memorialize him but thought that conventional ways such as jewelry weren’t enough. So in the fall of 2009, I bought some needles and pen ink and hand poked his initials onto my ankle. It was unusual but it was the start of my love affair with ink.

Over the next three years I added 10 more tattoos, ranging from simple sayings reminding me that I can always fall back on my friends and family to large portraits of food representing my passion for cooking. However, not everyone loves my ink as much as I do.

My parents continually question my reasoning behind permanently “defacing the body.” I don’t see it as defacing my body at all but because they don’t have any tattoos I understand their confusion; it’s more of a nuisance now rather than a difficult issue we have to seriously discuss. As for my work life, it really has no affect. It doesn’t really make a difference in my culinary career. I also believe that future CEOs won’t care as much about tattoos as today’s society does.

I’ve found it's easy to avoid being discriminated against for having tattoos by the way I present myself. I don't have tattoos on my hands or neck and it stops at my wris; I put on a nice button up shirt and nothing can be seen. I get the occasional stares and get asked why and sometimes I’ll sit there and explain why I have each one with no problem, but if you don't get it, you don't get it. My tattoos are for me, and me alone. I’m not using it to make a statement or to prove anything to anyone; it's just who I am.

I plan on getting an underwater piece done on my leg, flowers and the Maryland state flag on my arm. If I ever get to the point where I can get my hands tattooed I want them to be a version of life and death continued from the images done on my arms. As for the future, I’m not finished with my works of art.

Previous Post:How to Branch out Your First Week in College
Next Post:15 Songs to Help Keep Off The Freshman 15