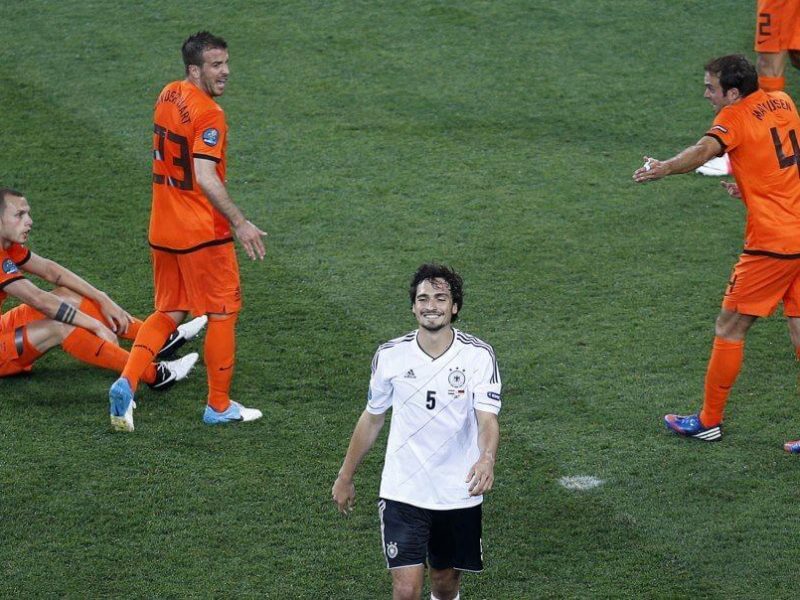 If You’re Not Watching the Euros, Euro-nly Missing Out

See what I did there? Good for you; that’s not the important part though. What you really should be seeing is the European Cup—it’s all everyone in every other country is talking about!

Log onto Twitter and there’s a good chance that 83% of the trends between 11:45am and 5pm EST will be about the European Cup. Hell, there’s a good chance that one of the celebrities you may or may not be following will be tweeting about one of the games. For example, Rivers Cuomo of Weezer is always tweeting about soccer when there's a major tournament. He even got the band to record a song dedicated to the US national team during the last World Cup! Even Seth Myers of Saturday Night Live fame is a self-confessed avid fan of the beautiful game and has tweeted all about the Netherlands (he goes all European and refers to them as Holland) over the course of their last two games.

Speaking of the 2010 World Cup finalists (Holland, in case you were living under a rock on July 11th, 2010 when they lost to the Spaniards) 10 million people in the Netherlands tuned in to watch their men in orange play Denmark in their opening match last Saturday. Considering there are only about 16 million people in the nation, that’s quite a feat. And then there’s the game featuring the past two FIFA World Cup champions—Italy of the 2006 World Cup and Spain of the 2010 World Cup, the later of which are also the defending 2008 European Cup champions—which had more than 2.1 million viewers in America alone: that’s more viewers than the Stanley Cup final between the LA Kings and the New Jersey Devils attracted! Those stats don’t even factor in the people streaming the games live to their laptop through ESPN3 or another, “less legal” website—none of which shall be named here as to avoid any FBI agents reading this to shut said websites down.

Not that anyone should be surprised: in less than a week of the tournament, there’s already been more excitement than you would see in a month of NBA “action.” And it certainly helps that we’ve just come off one of the most enthralling seasons English and Spanish football had to offer in decades of existence: the “greatest of all time” rivalry between Cristiano Ronaldo and Lionel Messi, the English Premier League literally being won in the final seconds by Manchester City, even David Beckham’s latest hairstyles, all of which have all attracted many new fans to the game. Not to mention the increasing popularity of EA’s FIFA for the Playstation and Xbox systems. The European Cup literally couldn’t have come at a better time for American fans.

But the Euros haven’t been all fun and games. Ahead of the clash between the co-host Poland and political and football juggernaut Russia, 5,000 Russian fans marched across Poland to the capital to watch the game. Amidst the marching, hundreds of Russians attacked Polish fans, forcing police intervention that ultimately brought the march to a halt. The altercations resulted in dozens of people injured and even more fans arrested for disorderly conduct. Quite the workout, no? Similarly, there have been reports of German fans attacking English fans, Irish fans running rampant as drunkards, probably even some Klingons provoking any Narnians present at the tournament. As with the 2010 World Cup in South Africa, a negative light has been shining somewhat dimly on the tournament with potential to grower brighter, blinding people from seeing the beauty of the game. But, nonetheless, it probably won’t keep the already mesmerized audiences from tuning in.

5 years ago when David Beckham set out to change American views on the beautiful game, many people said it couldn’t be done. Well, critics, eat it. And then go watch some good, ol' fashioned football. You know, the one where the game is actually played with feet.

Previous Post:Cooling Sexy Summer Recipes
Next Post:Pick Up Tips From… The Sorority Bee