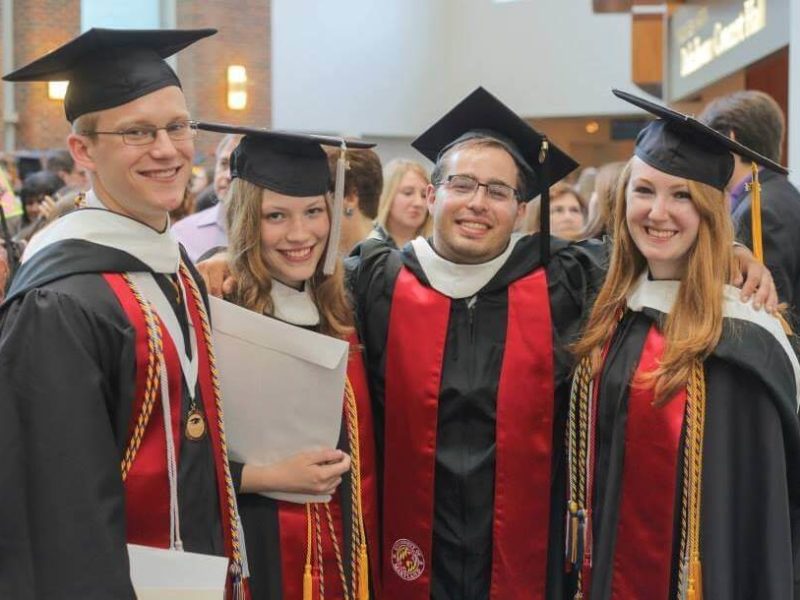 I Graduated College With No Regrets

I went into college cold. I was a relatively shy kid moving to a new state where I knew absolutely no one. It’s not like I was terrible at making friends…but what if I didn’t?

Four years later, at my graduation, that initial dread seems silly. Of course I made friends. An amazing, passionate, supportive group of goofballs who have changed my life in countless ways.

Now I’m thinking, there’s much more up ahead to fear as I enter the real world. Graduation, however, just felt like any other day of college. (Aside from the fact that everyone just happened to be dressed up like medieval chaplains, because why not?)

All that normalcy made the concept of graduating just seem natural. It made the idea of leaving campus to become a productive member of society seem almost palatable. I wasn’t particularly looking forward to it, but I figured this was the natural progression.

Standing among thousands of my peers at the University of Maryland’s graduation ceremony, I wasn’t getting any “end of an era” vibes. Not when we got to the parking lot full of confused and dehydrated students. Not when we were herded into the stadium like sharply dressed sheep. Not at any point throughout the entire way-too-long, oddly entertaining ceremony.

Instead of taking in nerves, my friends and I took graduation selfies, made editorial comments every time our awesome but crazy president did something wacky and sang Iggy Azalea’s “Fancy” on an endless loop.

Just another day in paradise with the most important people in my life. NBD.

Even after all 6,000 graduates filed out of the arena and turned into the mob to end all mobs, it still wasn’t hitting me.

My department graduation was the same day. I had decided that I couldn’t call myself a college graduate until I walked across a stage, shook the dean’s hand and returned to my seat. At that moment, it would be official.

That happened. Then came the nausea.

There was a split second I was afraid I was going to lose it. I could no longer call myself a college student. Everyone I knew was about to scatter and god knows when I would see some of them again. The real world was calling and I had no idea how to respond. My bubble was burst.

I composed myself. The ceremony went on and eventually ended, as ceremonies are known to do. We left single file, me still feeling mildly queasy. A few parental hugs and hundreds of graduation pictures later, I felt better. I just kept telling myself, it’s not really over until my graduation party tomorrow night anyway.

That party was, without a doubt, a success. We didn’t get a single noise complaint, the floor didn’t cave in and, because my roommates and I have the world’s greatest friends, we somehow ended the night with more alcohol than we had when it began. Score.

We had people sign a giant banner that had been hanging in our apartment for two years, kind of like a much cooler yearbook. The sign read “HAPPY BIPDAY,” because our local party store couldn’t handle the simple task of selling correctly-spelled messages.

The next morning, I checked the “B,” and a friend of mine had written me a thoughtful message about how happy she was that fate brought us together. That’s when it really hit me – it was really over. Full disclosure: a tear or two was shed.

She was right. I’m usually not a big believer in fatalism, but in this case it seemed fitting. Fate brought me to the University of Maryland. Fate gave me the best four years of my life. Fate brought the greatest friends in the world into my life.

Graduation served as a reminder of just how lucky I got at UMD to find that incredible and hilarious group of weirdoes. Maybe that’s why the whole concept of graduation wasn’t as bad as I had imagined it to be.

I think if you leave your university with a group of people who you expect to stay in touch with forever, fate did its job.

“And now whatever way our stories end, I know you have rewritten mine by being my friend.” – “For Good” from the play Wicked

We want to hear your take on the college experience. Submit your thoughts to [email protected]