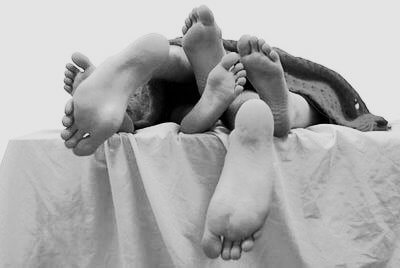 Two is a party – this has been established and confirmed – but is three a crowd? Threesomes can sound taboo; the idea of inviting a third person into your already intimate, private soiree might be a little strange. But then, hemlines above the ankle, birth control pills and showering daily were all considered going against the grain at certain points in history. Thankfully things have changed, right?

So let's temporarily suspend the puritanical, hum-drum and remarkably non-experimental reality that may, in fact, be your sex life, and say this is a definite possibility. Two girls at once is a pretty common guy fantasy, cliché even. It may come as a surprise, though, that it is for girls too. Dr. Kat Van Kirk, a clinical sexologist, marriage and family therapist said that “according to research, [threesomes] are one of the top fantasies for women, whether the third partner is male or female.”

But how does one actually pull off such a stunt? According to experts and college students who have given “three” a go, different strategies need to be used at different levels of participant familiarity. Different approaches need to be taken by the unattached than those in relationships for the desired… ahem, result.

Brian Miller*, a junior at Penn State, once participated in a 3-way hookup at a party with two willing girls, neither of whom he was dating. Miller said the attention distribution in the conversation was the most important element in the situation. “It was easy because once I started talking to them both, I'd be talking to one and the other would cut in, so I'd talk to her, then the other would get jealous,” he said. “It' went back and forth like that, I guess I played a little on their jealousy to get it to happen.”

Miller's suggestion for non-relationship participants on what not to do: suggest it. “For me, it was out of nowhere. If I had been the one to suggest it, I don't think it would have happened,” he said. “Bringing it up could be a home run or a strikeout. Thinking back on my situation, I probably would have gotten slapped in the face if I did.”

But he didn't suggest the three-way; “it just sort of happened.”

How to bring it up without breaking her heart

Van Kirk also said that in long-term relationships that aren't “open,” jealousy is a common bedfellow.

Brown said numerous factors of the situation made the three-way ok, including the other girl being “like a sister to her,” and living with her and her family in high school. “She had slept around with guys a lot, so I knew that just another guy meant nothing to her. It meant nothing to him either – I'm the one that had the intimate thing of waking up in his arms the next day. I knew I was the one he actually loved. She left right after so she wasn't there in the morning – and that was really important.”

“Three-ways in the real world are very emotionally confusing, especially if you get so turned on that you can't keep your hands off the friend (and end up ignoring your girlfriend),” said David Wygant, an author and sex and dating coach who has been featured in Maxim and New York Magazine. “Whatever your girlfriend says about it, you need to respect. Remember one thing which is the most important advice I can give you: make it about her and her pleasure, and it's amazing how far you can stretch those boundaries.”

“We didn't look at it as something cool we did, or something gross we did, and we didn't brag,” Brown said. “No need to make a big deal out of it – it was just another fun cross off the bucket list.”

Previous Post:Why Sports Are Great
Next Post:Diary of a Norovirus Survivor