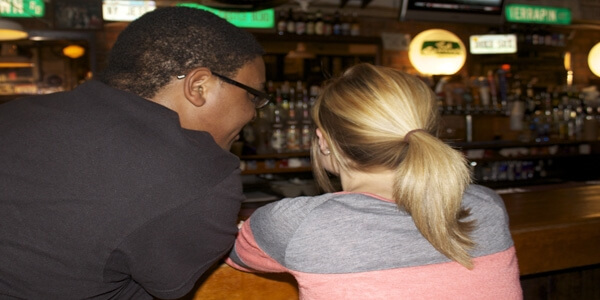 How to Avoid the Creep at the Bar

Melissa RecineOct 24, 2011
Home » Latest Posts » How to Avoid the Creep at the Bar
FacebookTweet

Going out for a good night with friends could turn disastrous simply by encountering the wrong person at the bar or party. Spending time hiding from a clinger or running away from a creep is time spent wasted (and not the drunk kind of wasted!). If you catch the eye of one of these types of people, there is not much that can be done to get away, but here are a few tips that can help create enough distance to avoid ruining your night:

Double Fist: Usually the creep will try to start a conversation by offering to buy you a drink. Of course everyone wants a free drink, but usually a drink includes actually hanging out with the guy who bought it. When desperately wanting to avoid the, “Can I buy you a drink?” question, be sure to have two drinks, one per hand. Seeing no free hands, it is doubtful that anyone will ask that question. I mean, where would you put it?!

Engaged: While it may be rare to be engaged in college, when out at a bar, people don’t necessarily know that you are in college. A good technique to use when being creeped on is simply faking an engagement. This might sound crazy, but it’s easy to slip a ring off of any of your fingers and put it on your ring finger, and usually, guys don’t stick around long enough to notice that it is not actually an engagement ring.

The Signal: Before walking into the party or bar, talk to the group and make up some kind of signal to let them know that you want to be taken away on “urgent business” immediately. This could be a simple hair flip or a phrase that is said to spark a friend’s attention. This works because it makes you seem like a good person when you leave to help a friend.

“Girlfriend/Boyfriend”: Once a clinger has decided on you for the night, it is hard to shake them off. Even telling them that you have a boyfriend or girlfriend will sometimes not get them to back off. Be sure to always have a close friend that can act as a stand-in boyfriend or girlfriend if need be. When the clinger actually sees this significant other, he/she will normally take a step back.

Look Away: Notice a guy or girl that is consistently attempting to make eye contact with you? Not interested at all? Make sure to look away and never look back. Both guys and girls take stares to mean some sort of interest. If you’re not interested, then don’t look…at least more than once.

Turn the Tables: When it seems that none of the other techniques will keep this clinger from clinging, turn it around and start acting exactly like him or her. Show up randomly, never leave his or her side, get his or her number and text them immediately. These things will most likely be a turn off to them as much as it was for you initially.