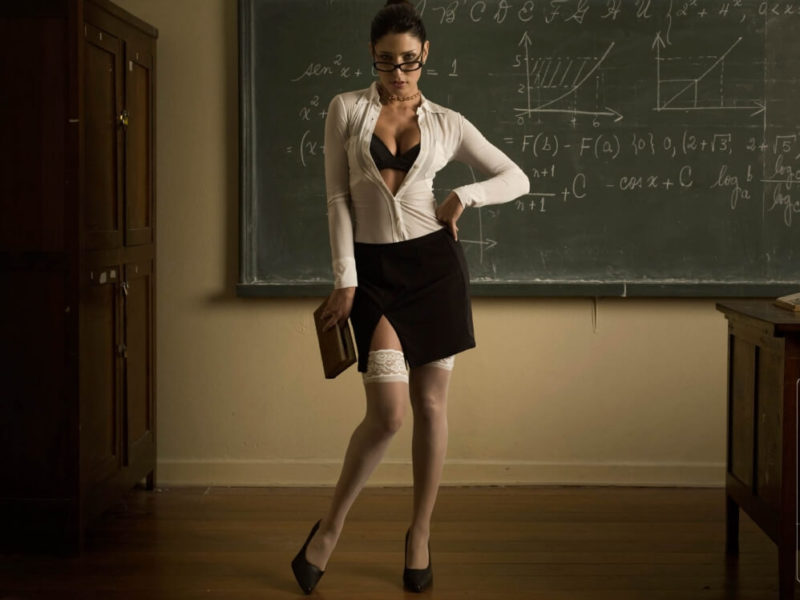 Have you ever had that school girl (or boy) fantasy of lingering behind in the classroom because you wanted to “talk” to your attractive professor about your “paper” due next week?  Hot for teacher syndrome is more common than you might think. Although it seems as if it belongs in a mushy chick flick or bad lifetime movie, it happens at universities and high schools constantly all around the country.

Scandals between teachers and their students tend to occur more in the high school environment; because the students are typically underage, there are many legal issues as well as moral ones. When it comes to college students, however, almost all are of age and are capable of making relationship choices for themselves. So is it still considered wrong?

Although we are passing into our early twenties during college, many students are still emotionally immature. Mikaela Gilbert-Lurie, blogger for the Huffington Post, believes that this low level of maturity helps explain why young students are commonly attracted to older teachers. “Adults simultaneously provide the promise of security and emotional safety and the opportunity for a teenager to feel like an adult, sexually,” Gilbert-Lurie says.

But no matter what the reason behind the attraction, Gilbert-Lurie firmly believes that “teachers who are unable to set boundaries with students have no place in the classroom.”

Sarah Wright, education insider for Education-Portal.com, says that for college students “who value intellect in romantic partners, professors can be extremely alluring.” The idea of a mature, intelligent partner is obviously as attractive one. Pair that with a cute face, and you may have yourself a crush.

So the experts understand the attraction, but peg it as a bad idea (big surprise.) How do students feel about it? Michelle Nader, a student at Florida International University, thinks that student-professor relationships are okay, “as long as both people give their consent and the student isn't in the professor’s class.” Though she does admit that that type of relationship sounds complicated (how would they pull it off?,) she thinks it has some potential as a legitimate relationship.

In a college setting, both the professor and the student are consenting adults; in that sense, the relationship is technically legal.  The real issue, however, comes into play at the university itself. A personal relationship with your professor may effect your grades, whether you find yourself unable to concentrate or whether you professor is blatantly trying not to single you out in class. Depending on your school’s policy on student-teacher relationships, you could risk getting kicked out of the class, or out of the university altogether. Not only that, but the professor could lose his or her job as well, and have a tough time being rehired elsewhere.

Some schools, like Middlebury College in Vermont, allow students and teachers to have relationships; however, it must be reported to the dean and the student will be assigned to a different professor for grading, according to Susan Donaldson James from ABC news.

In order to avoid any grading complications, Wright suggest to try and “wait until you're no longer actively being taught by the object of your desire.”

Middlebury College is one that “discourages, but does not actually ban, relationships between students and their professors,” reports James. Bans may not necessarily stop these relationships from happening; instead, it would most likely cause the couple to hide their relationship, attempting to leave the school none the wiser. Middlebury has the right mentality; it’s better to know what’s going on in your campus than be left in the dark.

For Nader, the fact that dating your professor is a risky move makes it that much more sexy for her; that being said, she’d mostly likely never try it (unless “the professor is an absolute ‘10’” in her book.) Also, the age difference isn’t very inviting for Nader. Hypothetically speaking, she says, “I can just imagine the look on my parent’s faces if I bring home a 50-year-old man.”

“I personally don’t find student-professor relationships alluring because I consider my professors authoritative figures,” says Priscilla Roman, also from FIU. “I don’t think engaging in a student-teacher relationship is worth compromising your academic career,” she adds.

Despite rules and risks, if a student and professor want to be together, they’ll find a way.

“Students will do what they want regardless of rules, regulations, and consequences. Student-teacher relationships are something that has been around for ages, and I think they’ll stay around in the future,” says Roman.

Whether the risks seem too much to take on or a small feat compared to your dreamy professor, make sure you know what you are getting yourself into. If you do decide to start up a relationship with a professor, look up the rules in your university or school first so you know the bottom line. Speak with your professor about what you both want to avoid awkward situations later on. Make sure you are aware of the professor’s family situation (married with kids does not fly in my book.) And most importantly, know yourself and your limits. If, all things considered, that beautiful English Lit professor is not worth the stress, walk away.

Previous Post:Keeping up with Klout: Why You Should Know Your Score
Next Post:Who Should Play Whom in the Fifty Shades movies