Honey, I Have an STI

I couldnâ€™t have sex anymore without feeling a painful burning sensation. Using the bathroom felt even worse. I knew something was wrong after the pain persisted for more than a few weeks, so I took a trip to my gynecologist.

She said it without hesitation, immediately followed by a list of treatments. I knew I could easily treat the gonorrhea but telling my boyfriend would be worse than the diagnosis. How could I tell him? What would I tell him? I considered writing him an email, sending him a letter, taking him out on a nice date and then breaking the news to himâ€¦but these all seemed to prolong the problem. I just wanted it to be out there and for him to know that would both be fine.

I decided to gather pamphlets about gonorrhea from my gynecologist and print out pages worth of research on the infection to bring to him. It would all tell him the same thing: although gonorrhea is an STI, it is common and treatable. The information Iâ€™d collected would support what Iâ€™d be telling him. He could get tested and get treated if he had any trace of the infection.

When I finally told him, he wasnâ€™t upset or scared or angry. Instead, he was relieved that I caught the infection earlier and that I told him when I did. He read the information I gave him and all the worry drained from his face. I went with him to get tested, holding his hand and repeating comforting words.

It turned out that he wasnâ€™t infected, but my warning to him was important just in case he did have something to worry about.

Katieâ€™s* story is a common oneâ€”one that many college students are facing in their own relationships. Fortunately Katie had a very treatable STI and was able to make a speedy recovery. But for those who are less lucky, the problem can be worse and the treatment can be a slow and painful process.

Both situations have two stages of recovery. The first is to get treated yourself. Find a health professional to tell you the necessary steps toward treatment. The second and often most difficult stage is breaking the news to your sexual partners. According to Holly Brewer from Health Guidance, this is a daunting yet necessary task and it could lead to severe health and social consequences if not completed. Telling your partners is â€œthe only option, and while you might think that you could potentially get away without telling [them], they would eventually be able to notice the symptoms on you, or when they developed the condition themselves.â€ 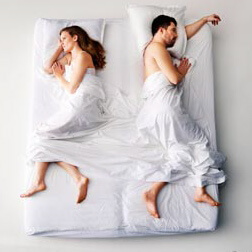 Katieâ€™s approach was a smart and reassuring way break the news. When you confront your partners about a possible infection, there will be scary thoughts and questions racing through their mindsâ€”questions about their future health, ability to have sex, ability to reproduce, chance of survival and other difficult questions to ask. Having helpful information at the ready when you give them the news will give them something else, something more hopeful, to think about.

Approach your partners with a carefully constructed plan that includes details of the STI/STD, who to contact, possible treatments and how to reach out for help. Expect extreme emotions; there will probably be anger, sadness and some resentment. Assure them that youâ€™re there for them and youâ€™ll help them get through the problem. Itâ€™s also important to remember that just because you have to tell your partners does not mean that they have also contracted the infection. Your partners could be completely safe and healthy, but you will never know unless you confront them.

Â *Name has been changed to protect the studentâ€™s identity

Previous Post:10 Resolutions You’ll NEVER Keep
Next Post:Before I Graduate, I Want to