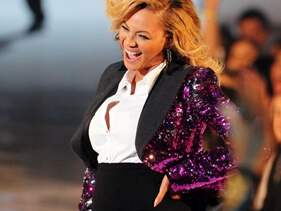 The Hip Hop bun is finally in the oven. We’ve been waiting for the coolest baby in – well let’s face it, the world – to be born for years now. After months of speculation, Beyoncé and Jay-Z confirmed that they are indeed expecting a child as Bey displayed her baby bump on the black carpet of the MTV VMAs, wearing an orange one–shouldered dress with tons of diamonds of course, on August 28. “I’m bugging out that she’s preggers. It’s going to be the coolest baby ever,” said Alyssa Cohen, a junior psychology major at Vanderbilt University.

The rest of the world shared in Cohen’s excitement. According to celebrity blogger Perez Hilton (www.perezhilton.com), Beyoncé’s baby bump broke international Twitter records with 6,868 tweets per second, surpassing Bin Laden’s death, the Royal Wedding and Japan’s earthquake. Apparently people are a lot more interested in the baby who will undoubtedly come out of the womb rapping in a Rocawear jump suit than they are in natural disasters.

It’s no wonder people care. Jigga Jr. is emerging into a world of rap royalty, where his (or her…gender TBD!) parents topped Forbes annual list of Hollywood’s Top-Earning couples in 2008 having made $162 million the previous year. Life’s not so bad when your dad founded two clothing lines, Rocawear and Damon Dash, and co-owns the 40/40 Club along with the New Jersey Nets on top of a 16-year rap career. Let's not forget that mom’s a multi-platinum selling singer as well as an actress and fashion designer for House of Deréon. “I mean, it’s Jay-Z and Beyoncé’s kid. This baby is going to be insanely hooked up from day one,” said Nicole Crystal, junior communication major at Cornell University.

With Jay-Z’s “Watch the Throne” tour with Kanye West kicking off October 28 in Atlanta, fans can’t help but wonder if Bey will be going on tour with hubby and child. Could the baby be born on the road? Probably not. Perez Hilton further blogged that Beyoncé is about three months pregnant and considering the tour ends on December 18 in Vancouver. However, hopefully pregnancy will not prevent Beyoncé from making a cameo appearance on stage for a 2011 “Bonnie and Clyde” performance.

For now we’ll just have to wait patiently to find out the gender and name of the baby. Will they go the Gwyneth and Chris route and name their child after a fruit (Mango, perhaps?) or will the power couple pick a more subtle title for their famous child? Only time will tell, but if this kid is anything like Jay and Bey, there will be no subtlety. T-6 months and it couldn’t come any sooner.