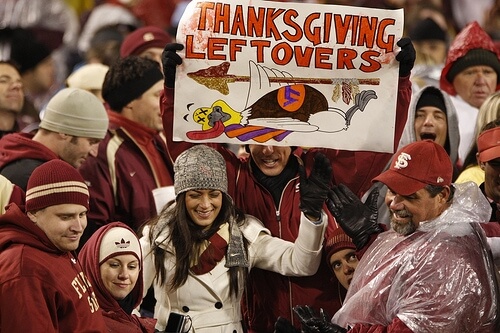 A little over a year ago, the landscape of the power six (automatic BCS qualifying or AQ) conferences forever changed. Colorado left the Big 12 to join the Pac-10, and when Utah accompanied them, the Pac-12 was formed. Nebraska ditched the Big 12 for the Big Ten, instantly upgrading an eleven-team conference to twelve. Yes, it is still named the Big Ten. TCU truly took a step up by switching from a non-AQ conference to the Big East.

Just when we all thought there was some sense of complacency in college sports with the conferences teams are in, news came out that Texas A&M is very eager to make the jump from the Big 12 to the SEC. Next, over the weekend we heard other names in the mix. ESPN reported Florida State’s name had been mentioned, and Clemson and Missouri where added to the list. While most of this was only bad speculation at the time, conference realignment 2.0 would be for the worst.

Now I it's tough to blame Texas A&M about their desire to change conferences. After all, their biggest rival, Texas, is bending the rules of the sports by creating their Longhorn Sports Network in a partnership with ESPN. Even if the Big 12 ultimately vetoes the idea of showing high school sports on the network after this year’s moratorium, Texas stands to make boatloads of cash and extend their shadow over A&M.

But as for any other school looking to extend SEC country, if you guys leave, I’m going to shake my head in a manner that would show my discontent for the situation. As far as my ACC-homer reasons go, I’d hate to be the butt of more bad jokes on the mediocre play in the ACC. Losing the top tier of programs would be crippling.

Going beyond my selfish reasons, I don’t think adding these teams is the right move for the SEC and its product on the field. The schools mentioned are good at football but the level of play is so much higher in the SEC. They could become whipping boys around the conference and have an uphill battle to climb to compete for conference title.

My biggest problem on expansion with the SEC is the possibility of a 14 or 16-team league. The SEC would have to deal with scheduling 16 teams for a college football season. And in a season where teams only play eight in-conference games, any one team will not play seven teams in their own conference each season. The SEC might as well be two different conferences if that happens.

Then again, what do I know? I’m just a guy who likes a conference with 10 teams.