Shop now
Home » Latest Posts » Dear College, Why Am I So Broke?
Life

Dear College, Why Am I So Broke?

Every generation who has studied and partied before me have graciously given me the same words of wisdom regarding college….it will be the four poorest years of your life. As a current junior, I can attest to this statement after receiving my less than ideal bank statement only a few months into school and simply wondering, where exactly did all my money go?

As college students, our financial restraints are often overlooked. While food plans, tickets for sporting events and of course our weekly alcohol spending all adds up, a number of students are forced to put aside money for student loans, housing costs and even extra curricular fees.

As many have come to learn, if you don’t spend wisely, you will likely end up in financial trouble. So how exactly do we cope with our money problems? Paul Golden, manager of media relations at the National Endowment for Financial Education (NEFE) suggests the following small things that can make a large impact:

“Think of your daily habits and how they affect your spending.” Spending money on small things such as coffee, energy drinks, snacks and cigarettes all eventually add up. Golden suggests that students take the time to consider what habits are necessities and which are not.

One of the most expensive habits that many college students encounter is of course alcohol. Whether it’s at a bar, off campus, or in a dorm room, the pricy beverage does add up. According to the CashCourse website sponsored by the NEFE, the average student spends approximately $1000 a year on alcohol. However, this can be easily managed by doing small things like cutting back on your number of drinks, not bring your credit card out and even sticking to a cheaper liquor. 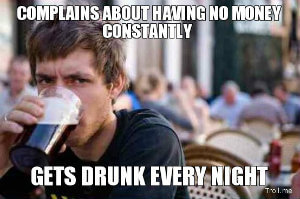 Golden also addresses the cost of college living especially in regards to those students who live off campus. “Simple things can help you save money such as having a roommate to lower the cost of a room, cutting back on utilities, not choosing the most elaborate technology and even choosing to take public transportation to get around campus.”

Golden further proposes that friend circles play an underrated role in students spending habits. “Think about the people who you surround yourself with and how much of your time spent together involves spending money.” If a student spends their time with people who do things such as go out to eat, go shopping or even enjoy a lot of traveling, it is likely their bank account will be effected. Golden also offers the idea of a financial buddy who a student shares similar spending patterns with.

Ultimately, the majority of undergrads are limited in their income flow as a number of students only work during the summer months and have a limited stream on income from parents. As a result, it is crucial to have some knowledge in smart spending.