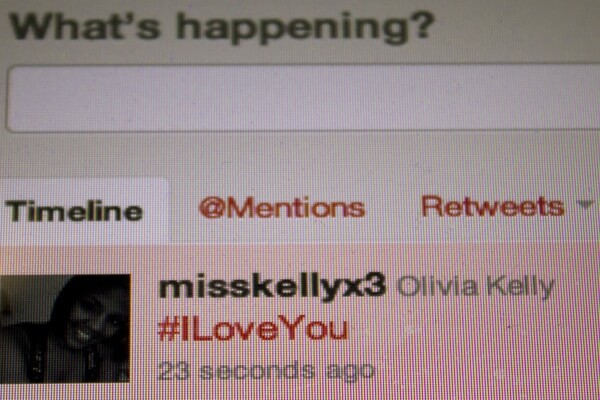 Hashtag: I Love You

Social media outlets like Twitter have made actually talking to someone face-to-face (and over 140 characters at a time) nearly obsolete. The days of experiencing a belly full of butterflies over a crush passing you a note in class have been replaced by elation over seeing that the hottie is actually following your tweets! So how do you flirt with your crush via Twitter? And what should you absolutely avoid?

According to Super Body Language, “…people derive only about 7 percent of the meaning of communication from the words…which the speaker uses…about 38 percent is based on tone of voice, and a whopping 55 percent from the speaker’s body language.”

Being that Twitter does not allow for communication outside of keyboard-clacking, you can run the risk of being misinterpreted. Avoid sending your crush messages that would require “reading between the lines” (i.e. saying “don’t you dare get me started” to someone in person while laughing and playfully punching an arm is flirty, whereas on Twitter the statement can be taken as haughty or disinterested).

Ginae McDonald, a senior at Grand Canyon University, suggested easing into a Twitter flirtation and then peppering in emoticons as you become more comfortable; “You need to start off slow, innocuous. [Ask something like] ‘How is your day going?’ After you’ve had the chance to start conversing with one another, start adding in some winks, smiles and progress from there.”

Keep it Clean and Don’t Get Caught

Alright, so you’ve managed to build a 140 character report with your beloved. As you become more comfortable in your banter, it may be tempting to keep upping the ante with more frequent and—to a greater end—provocative tweets.

Tweeting is not texting; your communication is broadcast to not one, but potentially millions, of tweeters. More illicit suggestions should be saved for private face-to-face moments.

Tracey Weldon, a second-year student at Teesside University in Middlesbrough, England, saw the mortifying consequences of getting caught tweeting something scandalous in class; “There was a girl in one of my classes last semester who was tweeting dirty messages to her boyfriend during lecture, got caught and the lecturer took the phone from her and read her tweet!” Yikes!

Just as you may need to keep your distance from your cell phone after a keg stand, tweeting while intoxicated should be absolutely avoided. Alcohol lowers inhibitions and what may seem like a great message under the influence, may actually break all social decorum.

So, there you have it: start off slow, drop in some emoticons and flirtation when comfortable and avoid getting down and dirty until you have some actual face time.