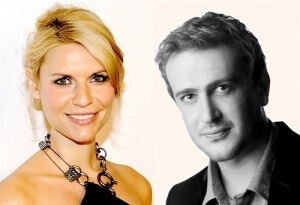 Josh AxelrodJan 24, 2012
Home » Latest Posts » Harvard Theater Club Honors Actors
FacebookTweet
Hasty Pudding Theatricals may sound like a dramatic British culinary society, but it just happens to be the oldest collegiate theatrical organization in the United States. Founded in 1844, the club is known for its all-male cast of performers and decidedly old school sensibilities. Check out this list of The Pudding’s prominent alumni: Theodore Roosevelt, Franklin Delano Roosevelt, J.P. Morgan, William Randolph Hurst, Jack Lemmon, and Rashida Jones (who wrote for them).
My point is: the club has a lot of clout in the world of American performance art.  Which is why when they announce their Woman and Man of the Year, the recipients of these honors take it very seriously. Last year’s winners were Crazy Stupid Love actress Julianne Moore and late night host/human chin Jay Leno.
Drum roll please. And the Hasty Pudding Woman of the Year for 2012 is…Claire Danes! She can look forward to a parade and a celebrity roast on Jan. 26. The My So Called Life actress just won a Golden Globe for the role of CIA agent Carrie Mathison on Showtime’s Homeland. She won a Golden Globe, an Emmy, and a Screen Actors Guild award last year for her portrayal of an autistic livestock scientist in HBO’s Temple Grandin.

Cue the drum roll again. And the Hasty Pudding Man of the Year for 2012 is…Jason Segel! His parade and roast will be held on Feb. 3. Not only has Segel perfected the lovable giant character as Marshall Erikson on CBS’s How I Met Your Mother, but he has also found big screen success with R-rated comedies like Forgetting Sarah Marshall and I Love You, Man. 2011 will also be remembered as the year Segel reintroduced Kermit and he gang back into the American pop culture landscape with his franchise reboot The Muppets.
Great choices Hasty Pudding! This must be especially sweet for Segel, coming right on the heels of the announcement that The Muppets was nominated for a Best Original Song Oscar for “Man or Muppet.” Being a Muppet of a man clearly pays off.
Photo: at http://www.charlesrivermedia.com/2012/01/24/crmg-with-claire-danes-jason-segel/
FacebookTweet
Life