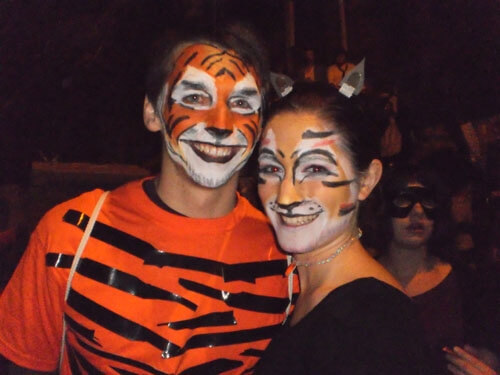 Ohio University has not only been ranked the No. 1 party school and Halloween school in the country, but also the most haunted campus in America. The campus is filled with thousands of costumed students and even more visitors for the weekend filled with traditions.

The Union Bar, located in downtown Athens, Ohio, off of OU’s campus, keeps a cult tradition alive with an annual showing of The Rocky Horror Picture Show, an event filled with Transylvanians and Dr. Frank-N-Furters.

OU sophomore video production major Capri Ciulla, who attended the event last year and plans to go this year, said, “I absolutely fell in love with the wacky environment of passionate fans and the craziness of it all. I even found myself singing and dancing along—it’s hard not to!”

“I think Rocky Horror is a great Halloween event since attendees are able to dress up as creepy as they want and act as insane as they possibly can,” Ciulla added.

One of the biggest crowd-drawing events is OU’s annual block party, which is not sponsored by the school, on Athens’ main uptown street. The event spans several blocks, has lots of local bands performing and is so crowded, “you can’t even get cell phone reception,” Sara Lowenstein, sophomore journalism and public relations major, said.

“The local music scene in Athens is really cool and unique, and Halloween is no different.”

Even though Colgate University is smaller than OU, its students still go all out on Halloween weekend. “People at Colgate tend to go crazy for Halloween,” Emily Bliss, sophomore political science major, said. The dining hall is decorated and employees wear costumes and serve Halloween-themed food, and the pep band wears costumes to the weekend’s sporting events, Bliss said.

Bliss said Halloween events coincide with Parent’s Weekend at Colgate, so students usually spend the day with their families and then go to costume parties at night. “Halloweekend is a fun-filled weekend because there is such a wide variety of events and activities during the day and then parties at night.”

Sophomore business and marketing major at the University of Kentucky, Cara Ryan, said “Halloween isn't that big of a deal here. It is just another reason to go out and dress up.” However, she said she went to several Halloween parties, and carved pumpkins and roasted pumpkin seeds with her friends.

Whether you favor tricks or treats, cult films or the occult, there is sure to be a college Halloween event for you.