Halloween in College is Seriously Awesome

90% of differences between high school and college are improvements. No parental supervision? Improvement. No classes until noon? Improvement. Getting to make friends with people from around the world instead of just around your block? Improvement.

1. The crazier the costume, the better 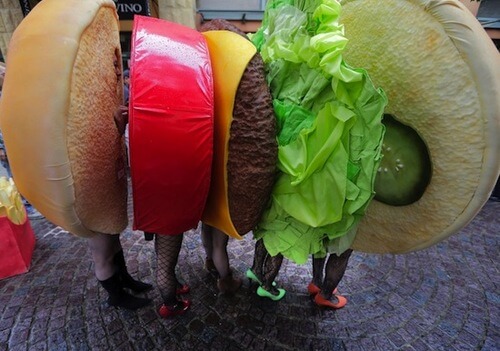 In many high schools, the only ones that got crazy with their costumes were the class clowns or theater kids. College erases that completely. You’re encouraged to be super creative and unexpected in order to pull a costume off. Even if you decide to go as something standard, like a cop or zombie, the more thought and work you put into it, the better. This year I decided to go as a lumberjack. Overdone, right? What’s going to make set it apart is my decision to start growing a beard a month and a half in advance. (Not kidding.)

2. It lasts for days

In high school, Halloween was pretty much ruined if it fell on any day other than a Friday or Saturday. You can’t possibly go wild and crazy on a school night! In college, however, it really doesn’t matter what day of the week is October 31st. You can still rage because you either don’t have early classes or you have the freedom to skip them. Also, Halloween is no longer just one day. Oh no. The worst day for it to be is a Wednesday, but even then you’ll see parties on the Saturday and Tuesday before and maybe the Thursday after. This year, we will experience Halloween Apocalypse. That’s because Halloween falls on a Thursday, which means parties will be happening the Saturday and Wednesday before, then that Thursday and the following Friday and Saturday. Get ready, and plan multiple costumes.

All bets are off during Halloween in college. There’s a possibility that you could go out and experience a typical night, but don’t count on it. If Halloween in college does what it is supposed to, these are going to be the crazy stories you don’t tell your children until they get to college when they’ve already lost respect for you. Think about the wildest night you’ve ever had and then add in all the stuff from all the other crazy nights you’ve had. Then add costumes. Yeah.

4. There are festivities other than parties (that often include candy)

Save the partying for the Witching Hour (midnight), and spend the time before participating in something fun. The past two years, my coworkers and I organized and worked a massive Halloween party for the dorm that we worked in on campus, complete with food and games and dancing. Purpose? To give students an option for celebrating Halloween other than huge, sloppy ragers. My friends and I have also volunteered to hand out candy to kids at the arena on campus so that they have a safe place to trick or treat. Both of those things were a blast, because I did them with my friends.

So, yeah, Halloween? Better in college. So much better. If you’re not taking advantage of it, even as a freshman, you’re missing out. Now please excuse me, I have to go trim my beard.