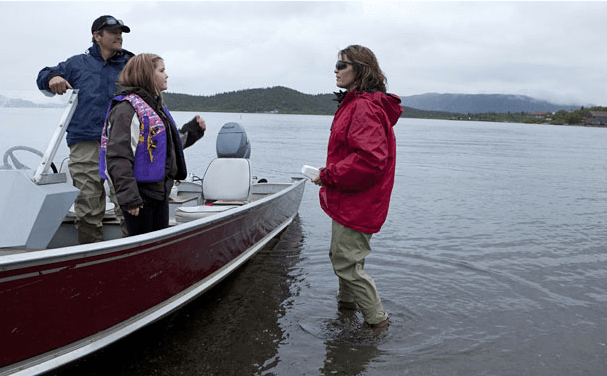 If you know anything about my television-watching habits, you probably know that I have very little shame.  I will proudly watch The Real Housewives of [insert location here], call my mother to discuss, and then flip the channels until I find a good Bones rerun or something.  I don’t even feel guilty about watching Dr. Drew’s Celebrity Rehab.  But I think they’ve finally come up with a show that makes me want to lock my bedroom door and turn the volume down…it’s a little program on TLC called Sarah Palin’s Alaska.  I am transfixed in morbid fascination, and I feel bad about it.  The Palins are quite outdoorsy, and they bond over camping and hunting and other activities I dislike.  So why is it so fascinating?  I have no idea…maybe I’m just so filled with relief by the fact that Sarah Palin is not in a position of power that it’s reassuring to watch her on reality TV, which is probably where she’s always belonged anyway.

One show that I am definitely not guilty about watching is Dexter, and the season five finale is this Sunday night!  For those who are as obsessed as I am, what the heck is going to happen?! Will Lumen be another (indirect) casualty of Dexter’s “dark passenger”?  How close is Deb to finding out who/what her brother really is?  Personally, I think Harrison’s nanny is a shady character, simply because she’s been too perfect all season long.  The writers have been pretty careful to portray her as this saint-like figure, but I think it’s just so they can blindside us with her secret evil-ness during the finale.  Maybe I’m just paranoid.  I hear somebody is going to die, though, and it better not be Quinn!  Way too cute to kill him off, right?  So, leave your theories in the comments so I can further avoid studying for finals.
And i news that is not related to television, the nominees for the 53rd Annual Grammy Awards were recently announced. Eminem is in the lead with ten nominations(!), Bruno Mars has seven, and Lady GaGa, Jay-Z, and Lady Antebellum all got six. Justin Bieber was also nominated (not surprisingly, since people seem to genuinely like his baby face and funny hair) for Best New Artist, but I might be a tad upset if he beats Mumford and Sons in that category.  Sorry, kid, but the pre-pubescent thing just doesn’t do it for me.  What do you think?  Will GaGa take home Artist of the Year in a lunch meat dress?  Will Eminem stop writing such sad/angry songs if he wins?  Let me know!
Image sources: www.fancast.com, www.dreadcentral.com, www.thehothits.com
FacebookTweet
Life

Previous Post:Cold Winter Must Haves
Next Post:Is Your Internship Illegal