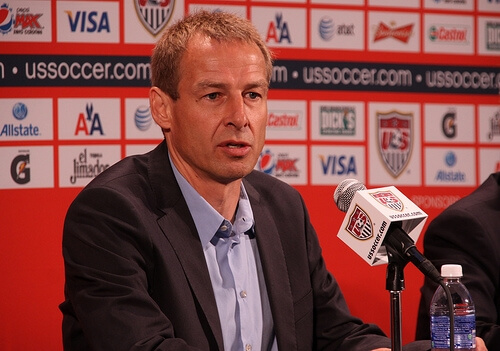 I give Jurgen Klinsmann a big fat C+ through his first three games as head coach of the United State’s men’s national soccer team. I know it is a harsh grade for a team that Klinsmann is still evaluating, so I had some sympathy and gave a plus next the “C.” Either way, though, the grade is warranted. Over six halves of soccer, the American attack has created one–count it one–goal. No matter how you want to look at it, the United States lost to two teams ranked below them in the FIFA rankings, Belgium (#37) and Costa Rica (#60).

The United States has shown flashes of a team with potential in Klinsmann’s first few games. In the end, though, his lineup has been plagued by the same problems of the Bob Bradley era.

First, Klinsmann’s side still plays with one forward, a downfall of Bradley’s reign. In each game under Klinsmann, Juan Agudelo has come off the bench and made an immediate impact. The young forward should be given a chance at starting alongside Jozy Altidore. Altidore has been nonexistent under Klinsmann and lacks the ball skills to hold possession in order for the United States to build up its attack.  With Agudelo and Altidore on attack, the United States will have a skill and size up front.

Second, the American defense is still very unsettled. At points, the Belgians were able to carve up the Yanks, especially the center midfield. The defense of Steve Cherundolo, Carlos Bocanegra, Clarence Goodson, and Timmy Chandler appears to be the most solid arrangement of defenders, but the one weakness could be Chandler’s defense. The German back is very dangerous on attack with his speed, but he clearly has lapses on defense when he fails to mark his man.

It is not all bad news for Klinsmann. In each game, the United States has had strings of beautiful passing for periods of twenty minutes. He did tie a Mexican side that his predecessor got rocked by. Klinsmann’s increased usage of players like Brek Shea and Chandler has shown that American soccer could have a bright future.

With a C+, Klinsmann has not nearly flunked out yet. The beginning of the honeymoon between Klinsmann, Sunil Gulati and American fans has been a bit rocky. These bumps in the road can be smoothed out by a nice candlelit dinner at the beginning of October (wins against Honduras and Ecuador).