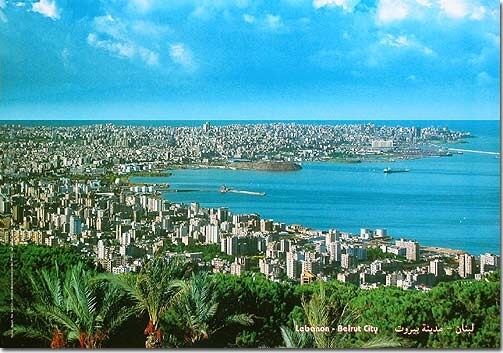 How does one define Beirut? It’s a city with a million contradictions, a million voices, a checkered past and cloudy future. It’s a polarized city, western-thinking Christian neighborhoods bordering the more traditional Muslim ones. Gleaming skyscrapers rub against remains of the bombed out buildings of the past.

But it’s the paradox that makes the city so… cool. It’s a perfect mix of traditional history blended with a new-world feel. The Lebanese are some of the most worldly individuals you could hope to meet anywhere on earth.

I’m writing this while sitting in a traditional Middle Eastern café. The chairs and tables on the street corner look out onto the Hamra district of Beirut, long known for its culture and affection amongst the intellectuals and artists of the city.

We order in Arabic. Two shisha pipes (called Nargieleh here) and plates of hummus. The one thing all Lebanese can agree upon is the quality of the food – the hummus is to die for.  Looking around, one can see old men playing backgammon or arguing politics or usually both.  The smoke from the shisha mixes with the sweet aroma of the food wafting up to the ancient wooden walls.

But any semblance of traditionalism ends there; all around are glaring signs of change and modernity. A group of young men hover in the corner over laptops, coveting the chance for internet access. The TV is on; Hassan Nasrallah, the leader of Hezbollah, is giving a live speech. He is accusing the CIA of “devious plots” against Lebanon. The seriousness of his speech is drowned out as a Beyonce song pops onto the café’s radio speakers.

Just then, hundreds of young men yelling and chanting march down the street. They are surrounded by dozens of armed soldiers tasked with making sure the demonstration doesn’t turn into a riot. They are holding signs and singing the praises of Bashar Al-Assad, the Syrian president. Their march began a block away at the Syrian embassy. The café goers barely look up from their water pipes…. the scene of angry protestors has become all-too-common a sight.

No one could deny the winds of change are in the air. The signs are all over. It’s impossible to predict how the Middle East protests will turn out, but the street demonstrations will not end anytime soon. The young people at their laptops are searching for a way to escape, a means to travel to America or Europe in search of better opportunities.  Yet these cafes, modern or not, will always be here, always remain a symbol of the deep culture and history of the region. It is a glimpse in time of Beirut, a single scene that tells the story of a city.