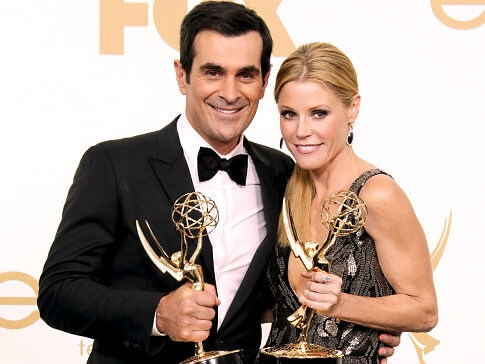 Did an Emmy awards show just go off without a hitch?! I think so!

Despite some backstage drama (i.e. Alec Baldwin’s joke being nixed, Lea Michele vs. Sarah Hyland Twitter war, etc.), the show served its purpose to honor television and the people who make it all happen.

Host Jane Lynch’s video montage introduced many of the nominated shows and paid homage to some shows that may have been overlooked in the major categories, like “Grey’s Anatomy."

The Emmytones (a group of TV actors/singers) helped transition between the different categories with cutesy musical snippets. Unlike previous efforts at past ceremonies, these bits did not feel like overkill.

Besides the major awards (Outstanding Comedy and Drama Series), the announcers revealed most of the acting, writing and directing awards in pairs. This made the ceremony effortlessly fly by.

Some of the more intriguing presenters of the night: Jimmy Fallon/Jimmy Kimmel, Charlie Sheen (#winning) and Amy Poehler/Melissa McCarthy.

Speaking of Amy Poheler. WOW. When each of the Outstanding Lead Actress in a Comedy Series nominees leapt to the stage after their names were called, one could feel the happiness in the theater. In such a competitive industry, it is rare that people can come together to honor each other.

–       WHO was the announcer?! This guy literally had me cracking up the entire time.

–       The Lonely Island = great recap to prove “Saturday Night Live” is not dead and can still produce a lot of laughs. Nice cameos by Ed Helms, Maya Rudolph and John Stamos for the “Three-Way” section. Also, Michael Bolton.

Unlike past ceremonies, I felt this year’s managed to (for the most part) hand out the awards to deserving recipients. Though at times these televised ceremonies can feel elitist, pretentious and overall unnecessary, it reminded viewers everywhere that television is still a thriving form of entertainment.

Previous Post:Accessorized for Success
Next Post:Which positions have guys and girls ranked the most pleasurable?