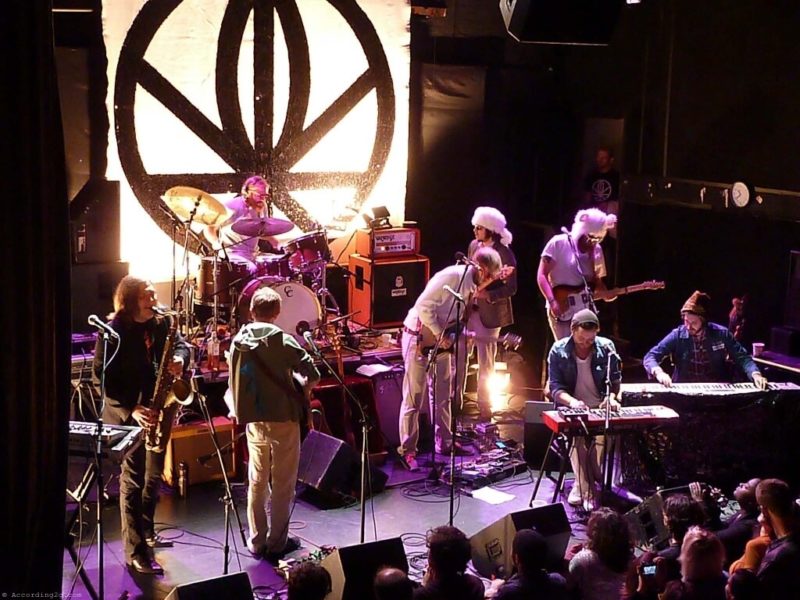 Taryn WemJul 29, 2011
Home » Latest Posts » Gayngs Talks to College Mag
FacebookTweet
Gayngs is a collaboration-type band featuring over 25 different artists, including Justin Vernon of Bon Iver and Rhymesayers rapper P.O.S.  The band began in creator Ryan Olson’s home, but relocated to Wisconsin studio, April Base.  College Magazine sat down and spoke with Olson about his experience with his unique band.

1.  How does the band work having so many different artists involved?
It’s really fun.  It makes it really hard to play shows though.  When we get to play shows it’s like a gathering of friends who don’t get to see each other very often, like a family reunion.  Just partying and traveling with your friends you don’t get to see.

2.  How is it mixing everybody's personal styles and tastes into one song — is it difficult?  What are your personal influences?
Not seeing each other makes it hard to record music.  I know all of the musicians and how they play.  But no one really stops me from doing what I do, no one hangs me up with editing.  We just hang out and record over a progression.  Then I’lll just go through and edit and use parts that I want to use.  Having different styles is the goal.  There is no challenge, it’s really fun.  And there’s no drama with this thing.  We don’t figure out much, more of a leisure band than anything.  Being in a band is like being in a relationship with five different people.  When bands break up it’s sometimes harder than a relationship.  So we do what we can to keep the atmosphere laid back and easy going.

3.  How would you describe the band’s genre?
The idea was to make soft rock, that was the goal.  It’s as close to soft rock as I’m gonna get.

4.  What has been your favorite city to play in?
We’ve had really good shows, Williamsburg was really fun.  All of them were fantastic.  Every time it’s more of like a happening than a show.  All of the cities were an incredible blast.  In upstate New York, we played a gymnasium that they were about to tear down.  Students went all out, temporary tattoos, wristbands.  That was a really fun show.  You could really put this band anywhere and we’ll have fun though.

5.  What was playing at Coachella like?
It was pretty amazing.  I had been the year previously (2010) with P.O.S.  I feel like usually outdoor shows are horrible places to watch bands.  Coachella sound systems are out of control.  It was definitely a magical three days.  And incredibly honoring.  It was super awesome to be able to play with this project.  The way this band functions we’ll never really play Coachella again.  It was definitely not lost on me, the opportunity to play.

6.  Any crazy tour stories?
We actually had our bus stolen.  That was pretty crazy.  We were getting ready to play Austin in the end of October.  Our bus got repossessed but we won.  It’s all good now.  That was a pretty crazy tour experience.  11 of us in a 16 passenger van.  Pretty miraculous tour vibe.  Honestly all the happenings are really special for us.

7.  Are there any shows/new projects that fans can get excited for?
The band is comprised of a bunch of bands.  Gayngs doesn’t have any shows so other people can start doing their real bands because there’s some really great ones that are involved with Gayngs; Solid Gold, Channy.  Possibly a new Gayngs album is in the works, but it’s completely different thing, it’s an early 80s feel.  It’ll be awhile before that’s together though.  There’s a bunch of projects from everybody, hopefully an endless stream for the next two months.  Gayngs is a pretty big web of folks who are constantly making things.  All of the bands involved are putting out really good music right now; The Rosebuds, Megafaun, Bon Iver, P.O.S.