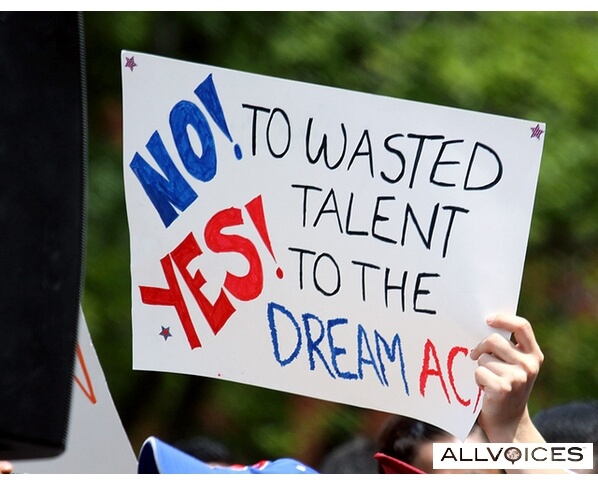 Future of Dream Act Not Over

While the election may be over, the politics doesn’t stop. And the DREAM Act doesn’t just go away. During this election, many states had the opportunity to vote for or against the DREAM Act. Despite the states’ decisions, the Act is still relevant and still has an impact post-election.

The DREAM Act was signed into law in Maryland on May 10, 2011 by Gov. Martin O’Malley. In July 2011, referendum supporters met the petition signature requirement so it was up for referendum as Question 4 in the election. The referendum passed in the election.

Educating Maryland Kids is a state-wide coalition created to defend the DREAM Act. It’s comprised of community groups, civil rights groups, faith groups and others, according to its website.

The main focus of its work targeted Question 4, which allowed the children of undocumented citizens to pay in-state tuition for Maryland colleges, as long they meet a set of criteria. Those criteria include filing three or more years of income tax returns, taking 60 credits in college and meeting all admission requirements. According to Kristin Ford, communications director for Educating Maryland Kids, the organization worked to rally community support for Question 4 with TV advertisements, by calling people, handing out brochures and talking to voters. “We want to make sure people understand what the act is and why people should support it,” Ford said. Their ultimate goal was to “win on Nov. 6 and make sure the DREAM Act is upheld."

Ford supports the DREAM Act because “it sends a message that doing well in school matters and it will open doors in the future.” She also sees it as a good opportunity for the state of Maryland because students who can go to college can make more money, which in turn will contribute to the economy. Not only is the act important for the kids it affects, but also there’s a “pragmatic economic principle: the more educated our workforce, the better off we are,” Ford said.

Ford was confident the act would be upheld, however, since according to her, a recent poll showed that 60 percent of Maryland voters support upholding the act, and they only need a majority to win. “People will do the right thing,” Ford said. “Their families pay taxes just like everyone else. This is just common sense.”

Students also have strong opinions on the DREAM Act.

Junior psychology major at Hobart and William Smith Colleges Liz Szwejbka shares a similar stance to Ford and believes educating these children will benefit the nation in the long run. “Someone needs to help them and look out for them and at this point they are everyone's children because they need a lot of help and support,” Szwejbka said. “We need as many people to be in college these days as possible because we are so behind in terms of education, especially math and science, among all of the countries in the world.”

Brian Harris, a junior environmental policy major at the University of Maryland supports Question 4 because he’s witnessed its positive effects first hand: “One of my close friends Rodolfo was born in Mexico but came to the U.S. illegally with his family when he was 12. Without the Dream Act, Rodolfo would've had a difficult time getting a full education due to the circumstances of his citizenship. Now that the Dream Act has passed, more educational opportunities have opened up for him and now he's enrolled full time at Montgomery College with plans to go to the University of Maryland after a few years."

Lauren Harris, a junior textile design major at the University of Georgia, is opposed to the DREAM Act because she believes it’s unfair to students who live in the country as legal citizens. “They came here illegally so they shouldn't have the option to get in-state tuition,” Harris said. “There are U.S. citizens that don't have the money to go to college who need the tuition.”

Junior fashion merchandising major at SUNY Oneonta Natalie Wrubleski also opposed the DREAM Act being passed. “Lets just focus on putting all of our nation's money towards American citizens who have had generations of family members that have lived here and can actually consider themselves Americans,” Wrubleski said. “If they pass that act then maybe my tuition will raise because they need more money to support other people who previously didn't apply to in-states.”

Miranda Menhinick, a junior physical therapy major at the University of South Carolina is against the DREAM Act because she found the process of gaining in-state tuition to be burdensome already. “It's already hard enough for us legal citizens to get instate tuition,” Menhinick said. “I'm finally paying instate after over a year of my parents living in South Carolina.”

Despite the referendum passing in Maryalnd, it is likely that the discussion on the Dream Act will continue as other states reveal their opinion on it.