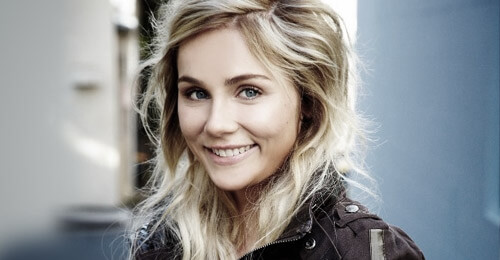 Josh AxelrodOct 8, 2012
Home » Latest Posts » From Australia To Nashville: CM Interviews Clare Bowen
FacebookTweet
Keep an eye on Clare Bowen. The beautiful blonde Australian may not be the biggest name on ABC’s Nashville (premiering Oct. 10 and starring Friday Night Lights’ Connie Britton and Heroes’ Hayden Panettiere), but she’s poised to be one of the breakout actresses of the 2012 television season. I mean, just look at her.
Bowen was already a veteran of Australian television and films when she made the jump to L.A. thanks to a little push from Cate Blanchett (for real). The University of Wollongong graduate is ready to make an impression on American audiences as country singer/songwriter Scarlett O’Connor. She talked to CM about Nashville, the joys of her job and getting career advice from an Oscar winner:
On working with Cate Blanchett on a Sydney Theatre Company production of Spring Awakening (Blanchett was an artistic advisor)…

She is phenomenal. She’s the one who told me to go to L.A. And it worked. I was very lucky to be able to work with her. It was scary but pretty cool.
On making the jump from Australia to the states…
I had a little taste of the U.S. in L.A. but I feel like the South is where real American culture is. I’m having a wonderful adventure here so far.
On her Nashville character…
[Scarlett] is shy. She likes poetry. Her entire focus is on helping other people. When she gets brave enough to show her writing…she gets set free and it’s an experience she never expected to have and finds a passion for. Music changes her whole life.
On working with the talent on Nashville (including creator and Oscar-winning screenwriter Callie Khouri)…
We’re all like a big family. I can barely put into words how lucky I feel. They’re my friends. We’re so happy that the public is so excited about [the show].
On how she sees acting/singing…
My job is basically to make people happy.

Find schools
On what she would say to aspiring actresses/singers…
Remember where you come from and how hard you worked to get where you are. Staying grounded is the one thing that’ll keep you from going crazy. [Also], get sleep. Your body is your craft and you should take care of it.
On why you should watch Nashville…

Nothing’s ever been done like it before. We’ve been so blessed to have been given music by such talented artists. We have something special here and everyone should come see it.
Photo: at Mindscape Films
FacebookTweet
Celebrity Advice Life

Previous Post:How to Stay Alive During Midterms
Next Post:What’s the Deal with Gangnam Style?