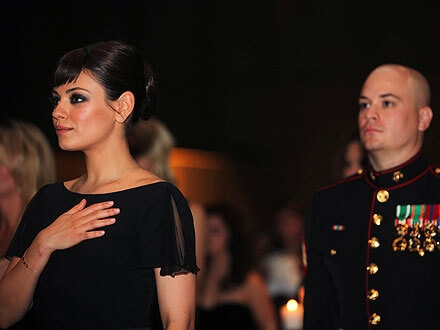 Friends With Benefits stars Mila Kunis and Justin Timberlake both recently attended Marine Corps birthday balls in Greeneville, N.C., and Richmond, Va., respectively. Kunis was asked by Sgt. Scott Moore via YouTube, and Timberlake encouraged her to accept. After Kunis’ schedule seemed as if it would prevent her from making the date, Corporal Kelsey DeSantis then created her own YouTube video asking Timberlake to her battalion’s ball. Both celebrities kept their promise to their respective dates and seemed very honored to attend.

When Lance Corporal Chris Merchent first heard that DeSantis had asked Timberlake to their Marine ball, he was surprised by her audacity. “She (DeSantis) just called him out over the Internet and basically told him if he didn’t go with her than Mila is more of a man,” he said.

Merchent is stationed in Quantico, Va., after attending The Basic School (TBS) for the United States Marine Corps. On Nov. 12, he attended his Marine ball in Richmond, along with Timberlake. Sitting at the table across from him, Merchent could see that Timberlake was moved by the event and wasn’t attending just for public relations purposes.

“He probably wanted to come and see one of and be part of one of the oldest traditions of the Corps,” Merchent said. “During the Commandant’s Birthday Message he was actually brought to tears. So I believe he got something good out of his experience.”

At first, the public might think Timberlake and Kunis were “granting fans’ wishes” for “good PR” by promoting their recently released movie at the time, Friends With Benefits.

Georgia Watkins, a freshman at Bellarmine University, doesn’t think all celebrity grant wishes are for PR, but there are some exceptions.

“I feel like some of the more silly things, like going to prom, might be largely organized to help promote an artist and attract attention. But there are artists who work to improve the world, even if by only helping a single person,” Watkins said.

Alayna DeMarchi, a junior at the University of Buffalo, The State University of New York , thinks it depends on the celebrity, but sometimes this wish granting can just be for attention.

“It’s sort of like the girls on Facebook who put up pictures so guys will be like “You’re so sexy,” DeMarchi said as she laughed. “Then others are just putting pictures up just for fun, not for attention.”

For most college students, we’re used to seeing young children with life-threatening illnesses have their dreams come true. It can be odd to see college-aged students have their requests fulfilled by their biggest fans.

When celebrities grant children’s wishes, it reveals a side to their image that the public doesn’t not usually have to chance to glimpse. The reverse applies to the event or issue, because when Timberlake and Kunis attended Marine balls, Merchant said the public viewed a different side of the armed forces, this time at the troops’ level.

“In some ways it (the exposure) could influence the people to join the armed forces to fight for their country, but it shows them the brotherhood that is displayed between the troops,” he said. “Complete strangers can come together with one goal in mind and complete the overall mission to defend our country from all threats foreign and domestic.”

Public figures can help advance large-scale goals like Habitat for Humanity, but sometimes college students deserve to dream about selfish desires instead. When college students were asked what their celebrity wish would be, we received a variety of responses.

“I want to spend a day hanging out with Benedict Cumberbatch or go on a date with Charlie McDonald from charlieissocoollike on YouTube,” Watkins said. “But I find it difficult to pick something that helps only myself when I know I could use this wish to benefit some cause that isn't well known.”

Merchant had difficulty thinking of a specific wish, but decided he would dedicate it to comedy. “It would be to hang out for a day with Daniel Tosh, be able to host a show with him, and give the guy on Man Falls of Treadmill on YouTube a web redemption,” he said.

Some students have other or conquests in mind. “I’d want to go on a date with Bryan Greenberg so I could win him over with my awesome personality and ass,” DeMarchi said. “Can you tell I’m on the verge of becoming a single cat lady?”