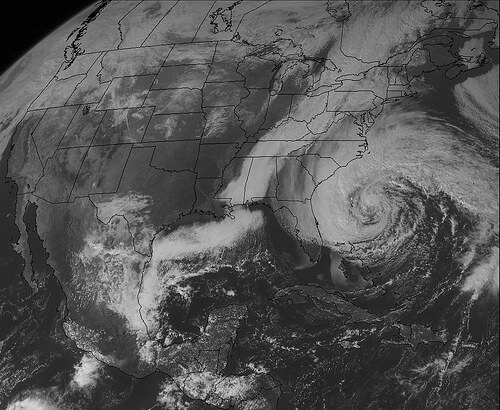 Sunday night, Hurricane Sandy touched down on the east coast. This tropical storm was ultimately classified as a category two hurricane and, in some states, a blizzard, earning it the nicknames superstorm and “Frankenstorm.”

Based on accounts posted this afternoon, at least 38 are dead. Nearly 80 million are without power. New York City must address 13-foot seawater surges. New York University Medical Center evacuated 200 patients. The Jersey Shore and parts of Bergen County are “devastated.”West Virginia withstood blizzard conditions. Universities, public and private school systems shut down Monday and Tuesday; some may remain closed the next few days.

And, The Weather Channel also warns, cold winds keep Sandy from simply dissipating above the Atlantic, complicating efforts to restore power in too many communities.

Not suprisingly, Hurricane Sandy also caused a social media storm. CBS News discovered 3.5 million tweets marked #sandy, “Instacane” to photograph the destruction and Citizen Tube to consolidate amateur videos. The storm has created an interesting and promising application of Twitter, Facebook, YouTube and Instagram accounts that are trying to do some good.

CollegeMagazine.com extends its best wishes to those affected by this terrible storm. Stay informed. Stay safe.

Previous Post:Dear College, Why Am I So Broke?
Next Post:Is She A Trick Or A Treat?