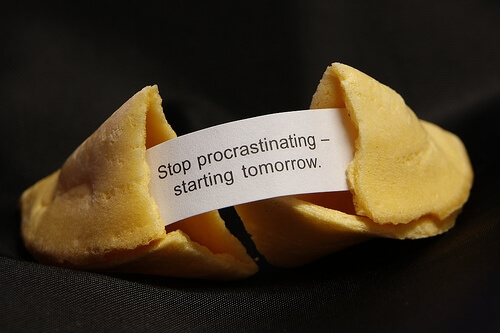 Focusing on Frivolities: How to Stop

You click on one picture that catches your eye. This leads to perusing through an entire album to see who wore what and who is spotted canoodling in the corner. We move from there to other photo albums on other pages and eventually we end up browsing through the ridiculous photos on stumbleupon.com. All the while your final paper (or rather the three sentences of the first paragraph that you’ve written) is staring at you pleading for your attention. But you ignore it; you have better things to do. This, my friends, is what we called a classic case of procrastination.

Let’s face it, many of those all-nighters we ‘love’ to pull are completely avoidable. The first step to overcoming any problem is admitting you have one (I, state your name, am a procrastinator). Personally I know one of the things I do is justify my superfluous internet browsing. It’s always, oh, just one more YouTube video, or five more minutes of Facebook. Big mistake. The thing about procrastination is that it can be like quicksand; the deeper you fall the harder it is to get out. I can’t tell you how many times “just 10 more minutes of twitter and Facebook” turned into an hour of stumbleupon.com, Tumblr, and ten thousand other useless sites.

In honor of the dreaded finals season most of us find ourselves in the midst of, it is of the utmost importance that we steer clear of temptation. I have quite a few friends who have experimented with a few techniques to avoid such things. I had two friends of mine change each other’s passwords on Facebook. They made a pact that they would not reveal the password to the other one until finals were over, no matter what! It took a lot of will power but believe it or not, it worked. When it comes to the most popular procrastination websites (i.e Facebook and Twitter) temporarily deleting your account most likely won’t help. Why? Well, all you have to do to restore your account is sign in and that’s one apple that need not be bitten.

The rapid evolution of the internet is truly amazing and serves wonderful purposes. However, at the same time, it can be so very, very evil. In times of tribulation it can be your enemy. The biggest lesson to learn is self-control but in dire times it is perfectly OK to block certain sites from your computer temporarily. It’s like blocking your crazy ex’s phone number; out of sight, out of mind and you can focus on more important things. It IS important to take study breaks, but make them more conducive than watching the newest episode of Modern Family (which if you don’t watch, what’s wrong with you?!). Like I said, once you start going through people’s timelines and photo albums, it is ten times more difficult to stop.

If only life were a breeze – but then everyone would be walking around with a college degree and hear me when I say we work extremely hard to earn that diploma. Don’t stop working hard right when the final battle is in sight. We make trick ourselves into believing we work better under pressure but you’d be surprised how much the quality of your work will improve if you gave yourself extra time. Let’s all try to be a little more savvy in terms of time management during this disastrous season of finals. The more landmines you can avoid, the stronger your chances are of survival (not to mention passing with flying colors).