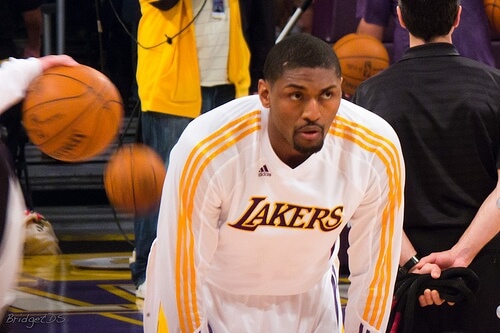 Fist Fight on Dancing with the Stars?

Over the next few weeks, America can tune in to ABC and see Ron Artest shake his behind on national television.  Less than seven years ago Artest was on national television for a much different reason.  He was pummeling a fan at the Palace at Auburn Hills.  Artest was escorted off the court wearing a jersey torn to shreds and was subsequently suspended for the rest of the season.

Have sports gotten to the point where they are too hazardous for the spectator?  It has been seven years since the Malice at the Palace, has the American and international sports world learned from it at all?

If the past few months are any indicator, then sports violence involving fans has not stopped but been ramped up since 2004.

Back in August, a physical game between the Bayi Rockets and Georgetown basketball erupted into a brawl.  The problems have not only occurred near a basketball court.  Who can forget the rampage that erupted after the Vancouver Canucks lost the Stanley Cup?  If Canadians are starting fights, the world must be going berserk.

The beginning of the professional and college football seasons has resulted in a number of incidents.  Even before football really mattered, fans exchanged blows at a pre-season match-up between the 49ers and the Raiders.  Then, on September 11 there was the stun gun incident at MetLife Stadium when one fan stunned another.

Even fans in non-contact sports get rowdy.  Last March, a San Francisco Giants fan was nearly beat to death outside of Dodgers Stadium.

Each of these episodes exposes some of the potential reasons for the increased danger for spectators at athletic events.  The Vancouver riots highlight the idea that sports have officially become too important to us.  When an entire city can be set to fire because of the difference between the letters W and L, one has to ponder where our society has gone.

The Georgetown throwdown could have partially been caused by some nationalism and racial tensions.  That instance, though, demonstrates the view that the world’s youth are becoming more violent, because they are exposed more violence on television, in video games, and other mediums.

Essentially, though, that instance and the football skirmishes show the best reason for the violence.  Analysts of the rise of soccer hooliganism in Europe recognize the role of masculinity in today’s society.  In a modernized world where men don’t have to hunt for food, battle for land, they have to claim their manhood in some other way.  Sports arenas have become the place to claim their masculinity.

All of those could be factors in this increase in violence.  What do you do about it?  What is my advice?  Wear a bulletproof vest and a helmet if you are going to a Yankees-Red Sox game?  Well, that may be a little over the top but maybe precautions are necessary.

From a violent sport (football) to a game without really any violence (baseball), sports violence certainly has become an aspect of American society.  You better hope that Ron Artest doesn’t receive less than a five on any his dances or else it could be Malice at the Palace 2.0, except Bruno Tonioli will be on the receiving end of an Artest punch this time.

Previous Post:Fall Forecast
Next Post:What if I take the pill late?