The face of entertainment, art and technology forever changed the moment Walt Disney used his very first paintbrush. He wasn’t without fault, but few would deny he brightened everything he touched. From comics to cartoons to films and eventually to theme parks, anyone with an affinity for magic knows of Disney’s indelible presence.

We’ve all heard rags-to-riches tales about men and women who rose from the ashes of nothing and became the legends of something. Disney, with his simple farm boy background, is among the most notable.

As a kid, I always knew I wanted to go to college. College held the absolute key to any kind of sustainable success. When I discovered my hero, the mouse-maker himself, had never been to college or graduate high school, I was shattered.

In my uninformed eyes, his actions weren’t noble—they were foolish. I was a fragile eight year-old, my outlook on the world myopic (as eight year-olds generally are) and for the first time (in forever) I turned into the uptight little cretin I’d be for the next several years.

Picture a red-headed Hermione, sans the actual magical powers. I did, however, possess the fantastic ability to make friends disappear at the drop of a hat; I indulged in my own fair share of bossiness from time to time.

Despite my resolution, I couldn’t help but continue my adoration for the Disney legacy and hoarded this knowledge with a bitter fascination. The time he bravely stood up to his parents and told them with stubborn determination, “I’m going to be an artist,” always resonated with me. The man wanted to act, he wanted to make art, entertain and explore. Deep down, I was jealous. I wanted those things too, but lacked the guts to admit it.

A wonderful Disney story, and perhaps my favorite, is one of failure rather than success. After declaring bankruptcy for his first company, Laugh-O-Grams, all of Disney’s worldly possessions included one sport coat, mismatching pants, a faux leather suitcase, two pairs of socks, some drawing materials and no more than $40 to his name. But when he hopped on his fresh-start train to Hollywood, California, he bought a first-class ticket.

Say what you want about fiscal conscientiousness. The ability to learn from failure and pursue your dreams despite it—that’s a winning state of mind.

College contains its own set of obstacles and its own set of fears along with it. I’m a telecommunications production major with no desire to work in news, but excessive knowledge of news production. I love art more than anything, but failed miserably as an art major. I’m convinced I’m meant to be a writer, but am terrified to seriously pursue it.

These contradictions are at times oppressive (Next in this series: an open letter to the guy who declared the arts an employment “Dead Zone.” You’re terrible and I hate you). Disney was courageous enough to push through his uncertainty. If that’s not inspirational, then what the hell is?

I’m not sure if I can properly explain what this company means to me. I could mention how fascinated I am by the animation process, of taking something stationary and bringing it to life. I could go grand and discuss Disney’s prolific influence on the entertainment industry.

When I really think about it, the answer is very simple. These beautiful, poignant moments in film—think Andy giving up Woody once and for all or Hiro breaking down in front of Baymax after his brother’s death—exist because some wonder-struck kid on a farm in Missouri wasn’t afraid to fail.

To me, Disney Animation is more than just a bunch of cartoons. It’s taking these horrible things that people deal with—pain, anger, guilt, fear, sorrow, heartbreak—and showing them the basic human fact that nobody is alone.

Animation makes the absurd possible and the impossible less absurd. It also reaffirms what we often can’t admit to ourselves: Acting silly is okay. Feeling scared or sad is okay. Having dreams is okay.

I’m not saying dropping out of school and moving to Hollywood will solve all my problems, but maybe that psych exam doesn’t seem so scary with some perspective. For me, college was definitely the right choice. I’m at home here and despite the uncertainty, I know I’m headed somewhere good. I don’t resent Disney’s decision to leave school anymore. In fact, I’m now self-aware enough to know that things were different back then.

Walt Disney has been my hero for as long as I can remember. And now at 20, the same age he was after hopping on that train, I’ve finally got my first-class state of mind. Thank you Disney, for guiding me all these years and showing me that bravery and wonderment aren’t mutually exclusive. You’ve been the most wonderful of role models. And I can say now, with freeing certainty, I am satisfied with my care. 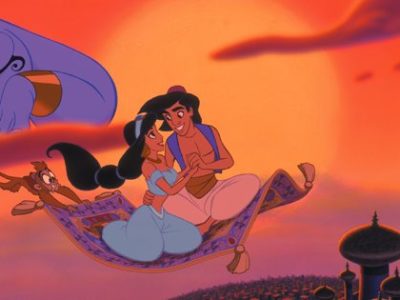 CM’s Top 10 College Illnesses
Next Post: There is Hope: Leaving an Abusive Relationship