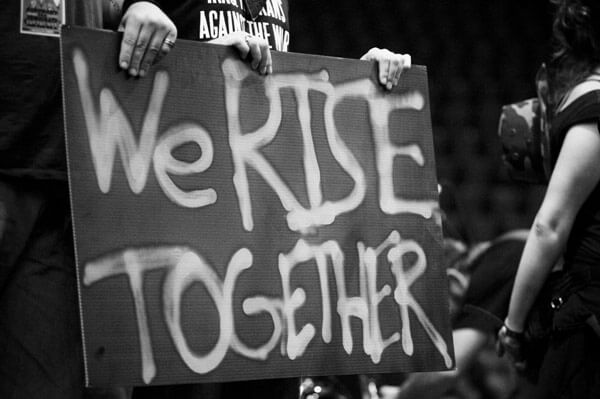 With the Occupy Wall Street movement spreading across the country, and even the globe, many notable musical talents have been performing for the protesters. While some of these songs have beats that will get you jumping in the heat of rebellion, others brandish lyrics that get to the heart of the matter.

Morello not only has a past of winning Grammy awards, but also performing at protests threatening civil liberties. One of his more recent musical acts, The Nightwatchman, is what Morello calls his “political folk alter ego.”

Grey sings a emotional chorus about her regrets from not speaking her mind, but Fiasco lays everything out on the table with this undercover lyrically-charged hit.

“We are at war with terrorism, racism, but most of all we are at war with ourselves.” A somber epic of religion and society, West’s intimate verses describe the individual’s struggle within.

4. All These Things That I’ve Done – The Killers

Listen to the chorus singing, “I got soul, but I’m not a soldier,” to the tune of The Killers’ guitars. Then see how long it takes for the upbeat, yet soulful rock song to be stuck in your head.

This song may be loud, obnoxious, and offensive, but it definitely can’t be ignored. Green Day criticizes propaganda, paranoia, and the media to embody a rebellious and unhappy generation.

This Canadian indie band has been defying “normal” rock music since the early 2000s, and they continue to break out of the Suburban stereotypes today.

7. Bulls On Parade – Rage Against the Machine

Morello is also the guitarist for Rage Against the Machine, a band known for its political activism and rap metal style. The heavy beat will have you thrashing around in distinctive RATM style, but don’t forget the reason behind the music.

8. Where Is the Love (Featuring Justin Timberlake) – Black Eyed Peas

Even though the Black Eyed Peas are currently on a music hiatus, “Where Is the Love?” wraps up this list perfectly. The group matched melody with purpose in this 2003 hit from the album, Elephunk.

Previous Post:College Students Live On Cruise Ship
Next Post:Hashtag: I Love You