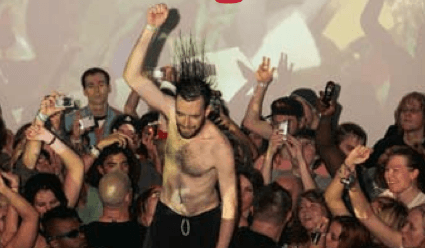 Feeding the Animals with GIRL TALK

Mash-up artist Gregg Gillis was once a col- lege student just like the rest of us. He studied hard, partied a lot and graduated with an engineering degree. Now 28 years old, Gillis has released four albums; his most recent, Feed the Animals, was ranked #4 on Time Magazine’s Top 10 Albums of 2008. His use of sampling, drawing on hundreds of songs ranging from Radiohead’s “Paranoid Android” to Wu-Tang Clan’s “C.R.E.A.M,” makes him more of a composer than a DJ. Critics call him “a lawsuit waiting to happen.” Fans just know him as Girl Talk.

College Mag: What kinds of bands were you really into during college?
Girl Talk: I followed a lot of electronic music [and] experimental stuff like Kid606, Negativland, and John Oswald.

CM: Were you the kind of student who studied a lot, or were you skipping class and partying?
GT: I went to school for biomedical engi- neering [so] the majority of my time was dedicated to hitting the books. I don’t think I could have stayed in college if I wasn’t intense about that. I went out and got f-cked up a lot but still managed to pass.

CM: What’s the meaning behind the name girl talk?
GT: There’s a band from Seattle who had an early seven-inch single album with a B-side track on there called “Girl Talk,” so I appropriate that as the band name.

CM: I really love your album feed the Animals. what was your inspiration for that album?
GT: After Night Ripper [Girl Talk’s third release, from 2006] came out, the demand for performances took off, and in order to do that, I [had] to prepare new material to keep it lively for me and the audiences. In making most of the mate- rial for Feed the Animals, I wasn’t even thinking about making an album. After a couple years of doing that, I had enough material to make a new album.

CM: Looking back on feed the Animals, are there any parts of the album you would change?
GT: Not really. Looking back, I analyzed it so much and [took] my time with it; I spent eight hours a day finishing a one-minute segment. Even now, I have a hard time getting in the mindset of how intently I was thinking about everything.

CM: Which musical artists can fans look forward to hearing in your next album?
GT: Right now I’m mixing a bunch of Beyonce, Project Pat, Jackson Five, The Beatles. I never know.

CM: So i hear you crowd surf a lot at your shows….
GT: Yeah, I just like to get in the crowd a lot, whether it’s surfing or jumping on someone’s head. I really like to break down the boundaries between audience and performer.

CM: When you’re going crazy at shows, do you ever get hurt?
GT: Yeah, pretty often, nothing major. I knocked out one of my front teeth one time at a show. During the shows, the adrenaline is rushing, so it’s hard for me to feel physical pain.

CM: How would you react if you were at a club and you heard a remix of one your songs?
#4 on Time Magazine’s Top 10 Albums of 2008. His use of sampling, drawing on hundreds of songs ranging from Radiohead’s “Paranoid Android” to Wu-Tang Clan’s “C.R.E.A.M,” makes him more of a composer than a DJ. Critics call him “a lawsuit waiting to happen.” Fans just know him as Girl Talk.
GT: I would love it; I think that’s the next step. If I make new songs that are consid- ered entities, it makes them fair game for someone else to remix them. When someone remixes a Girl Talk song, that means I did a good job in transforming the samples into my own work.

CM: Any advice for college students who want to create their own mash-ups?
GT: Try to never focus on making a living off of it. The biggest thing to remember is never really care what other people are thinking and stick to what you think is cool.

Previous Post:Heavy D Trades Hip-Hop For Hemp
Next Post:They’re Laughing At You…Not With You