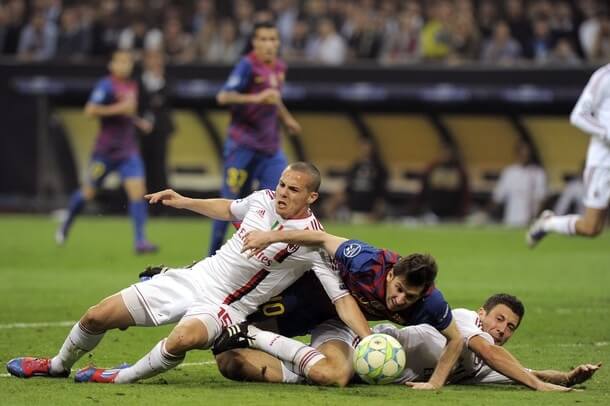 Following a 0-0 draw in a UEFA Champions League match against AC Milan at the San Siro Wednesday night, European powerhouse FC Barcelona has filed a complaint to UEFA, the governing body of the competition, claiming Milan purposely tarnished the condition of the field to hinder Barcelona’s ability.

This isn't a prank–this is real life. The team who beat Manchester United 3-1 last year to win the competition and be deemed champions of Europe is blaming the pitch for the poor performance. The official statement regarding the matter on the Barcelona homepage is “FC Barcelona has lodged a complaint with UEFA over the state of the pitch at the Giuseppe Meazza (San Siro) stadium during the Champions League match [Wednesday]."

Pep Guardiola, the manager of Barcelona, had this to say following the game: “We adapt to everything, we come and we play. But it's a problem for the quality of the occasion. It's difficult when the pitch is in this state." Almost immediately following that, if not by the end of that very interview, he realized how lame it is to blame the pitch and would hint that Barcelona only had themselves to blame. Unfortunately for him, he couldn’t reabsorb the words he’d already spoken. If that were possible, a lot less break-ups would happen on a daily basis—true story.

On the other hand, Lionel Messi, football’s current golden boy, couldn’t help but voice his disappointment in Milan’s pitch. “It was a tough match that we should have won. We played our game but it was difficult because of the pitch, and because [Milan] are very strong,” he said to the Catalan giants’ official website.

Anyone who follows Barcelona even the slightest bit knows one thing: Barcelona is spelled “M-E-S-S-I,” just as Real Madrid is spelled "R-O-N-A-L-D-O." If little Lionel can’t perform, neither can the rest of the team—and it works both ways. Without the assists of Xavi, Alonso and Iniesta, Messi is a lot easier for opposing teams’ defenses to handle. In fact, people on ESPN Socceret’s forums joke that Messi brings his three teammates to the bedroom to help him perform. A disturbing image, yes, but I wouldn’t be surprised if it were true. After all, it seems orgies and scandals are just another side to modern day football. (I won’t tell you that it wasn’t the English national team which wasn’t involved in a similar incident. Confused you? Good.)

Unfortunately for Barcelona, the San Siro is shared by two world-class Milan teams on a weekly basis: AC Milan and Inter Milan. Most stadiums are used by one team per week, maybe once every two weeks at the most. With two teams as involved in the game as Inter and AC Milan are, there could be as many as four high-profile games on one field in the span of a week or so. As you might imagine, the San Siro gets all sorts of messed up, spelled with a capital ‘f.’ If Messi wants to see a bad field, he should try playing on that of my high school—the crappiest professional field is still probably light years ahead of all the others in the world.

For a team as talented as Barcelona, it astounds me how much they complain and cheat. What perplexes me even more is that they haven’t received any Academy Award nominations for their acting. Especially against Real Madrid, they dive like they’ve been hanging out with Michael Phelps after practice. And now they’re blaming the pitch for a draw against one of the most successful teams in history?

What a bunch of overgrown babies. Sure, I may be a little biased, being a Manchester United fan and all: I still have yet to forget the bitter taste I experienced during that final in May last year—not the saltless McDonald’s fries I was eating during the final but the actual 1-3 score of that game.

Anywho, the second leg of the draw will be next Tuesday, April 3, at Camp Nou in Spain; Barcelona’s home field. It will, essentially, be a winner-take-all-go-through-to-the-next-round scenario. That being said, since it’s an away game for Milan, if they were to manage another draw with goals scored, such as 1-1 or even 7-7, they will advance because the ‘away goal’ rule will be in their favor. But if Barcelona is knocked out of the tournament and blame their field for the loss, then they really only have themselves to blame…if that makes sense.

Previous Post:10 Ways to Turn Him On
Next Post:From the Senior: Love Your Spring Semester