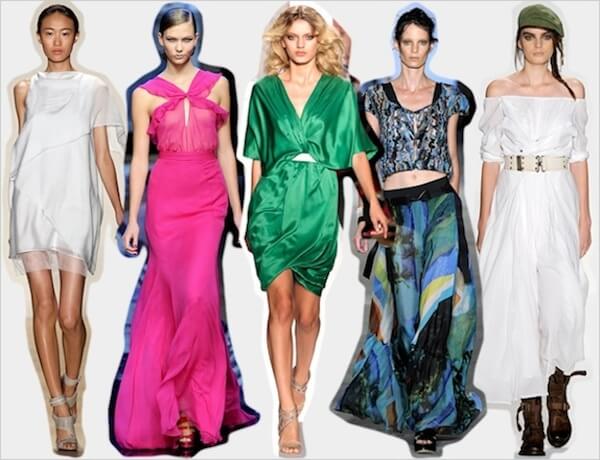 The crisp breeze of fall is fast approaching, and I personally don’t think it can come soon enough – this summer was brutal! But as usual, the rest of the fashion world is a few steps ahead of us; designers have already fast-forwarded to Spring 2012.

While everyone was buzzing over Ralph Lauren’s pastel florals and gleamy satins, I was taken by Bill Blass’s preppy simplicity. His collection may not be overly inventive, but his subtly updated classics stole the show. Navy, white, and red were the main colors, and traditional-yet-trendy stripes added just the right amount of interest. Note how he added a cropped tee under a boxy blazer and tied a giant bow to a red shift – it’s those clever details that make an impact on simple heritage pieces.

Spring is all about femininity. Admit it, you rush to pull out your floral dresses, flowy skirts and bright colors the minute the temperatures hit 60 degrees, too. Jill Stuart decided to take the true spirit of spring and run with it, creating a dreamy line with saturated pastels, kitschy patterns, floaty organza, interesting shapes and scalloped hems. But the collection isn’t all fluff; tiny twists on classics – like a silky shorts suit and long-sleeved belted romper – kept her pieces from being too sugary sweet.

Alexander Wang always delivers covetable, ingenious collections, but this one was especially over-the-top cool. His tough-girl vibe was present as usual, but an additional sense of “athletic chic” and a NASCAR influence lent oversize bombers, laser-cut mesh and cargo pants to his collection. Wang infused the high-speed aesthetic with artistic graphic patterns and bright colors, but even those had a sporty vibe – the “tribal” jerseys are actually manipulated stadium seating charts. You’ve done it again, Wang. Not surprised at all.

Timo Weiland’s first-ever runway show stole the hearts of many, both for its dreamy artistic elements (I can’t stop looking at that mini dress!) and its insane wearability. Beachy prints and fabrics were reminiscent of the steamy, humid days of summer, and thoughtful details – like long silk skirts fluttering open to reveal shorter skirts underneath – took Weiland’s collection from covetable to obsession-worthy. But what’s even better is how you can truly picture any of these pieces walking down the street or appearing at a chic cocktail party – nothing too over-the-top for Weiland’s first show, and I think it’s safe to say that was a fabulous move.