The newest Facebook update is not just a tweak to your timeline. Facebook recently introduced Home, a software design for smartphones that basically makes Facebook the core of your phone’s operating system and applications.

"With Home, you see your world through people, not apps," Facebook founder and CEO Mark Zuckerberg said at a press conference, according to an article in the Huffington Post.

When people turn on their phones, for example, the first thing they will see is Newsfeed updates from Facebook. This “cover feed” will be an updating slideshow of status updates, pictures, and other multimedia that users can like and comment on straight from their phone’s home screen. Home will also include “chat heads,” which will allow you to chat with friends and contacts without leaving an application.

“It kind of reminds me of the whole thing that Google is trying to do with Google Glass,” said sophomore Ted Raymer, who is studying screenwriting at NYU. “It’s as if all of these different social media sites are trying to connect with everything in your life and integrate all your communication, which is a little bit creepy in my opinion. I understand how technologically it’s really advanced, but socially and realistically it’s more just like Facebook is trying to take over your life.” 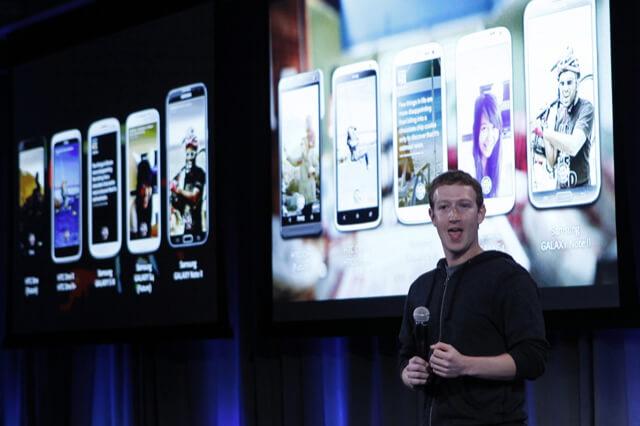 “I think it’s pretty cool in terms of convenience, with the messaging and the connecting of all communication,” said Allegra Thaler, a sophomore at Boston University studying hospitality. “But it definitely has dangers of all sorts,” she said in response to Facebook’s info-gathering abilities.

Raymer said he deactivates his Facebook once in a while when it gets to be too overwhelming or distracting. “With something like [Home], it’ll be even harder to separate Facebook and social media from your real life.”

Facebook Home will be available for Android phones by mid-April, and tablet versions of Home are slated to be available within a few months. Watch a demonstration video here.