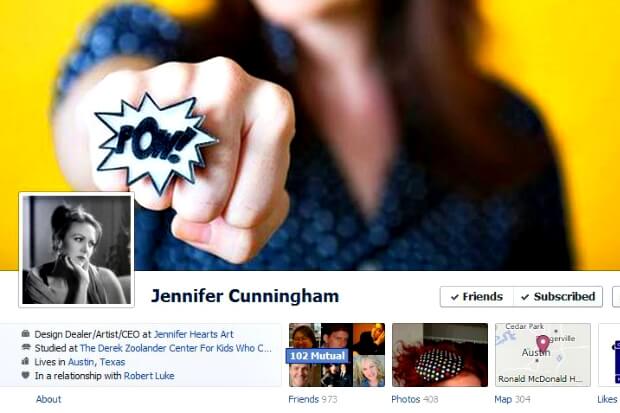 What Timeline Says About You

Josh AxelrodApr 19, 2012
Home » Latest Posts » What Timeline Says About You
FacebookTweet
If you don’t have Facebook Timeline yet, you’re missing out. Yes, just like with every Facebook layout change, there was that initial moment of shock and “ugh, I’ll never get used to this.” Now that I’ve had Timeline for a few months, I know that, as usual, the outrage over the new layout was much ado about nothing.  All you Timeline haters: simmer down because all you do is clog my news feed with whining.
One of the coolest features of Timeline is the cover photo, that huge banner at the top of your profile that you can customize to your heart’s content. Just as your profile picture says more about you than you might realize, so does your cover photo. In honor of the “Design College Mag’s Facebook Timeline Cover” contest (where the winner gets a copy of Adobe CS 5.5!), we decided to take a look at some prevalent cover photos and how they reflect upon their owner:

These can range from a lush sunset to an overhead shot of a beautiful city to a person looking off into the distance while clearly contemplating the meaning of life. This could create the false impression that you’re some sort of hipster (or you could be one, CM loves hipsters). If your photo is a black and white shot of grass blowing in the breeze, some might find that (and subsequently you) to be a bit pretentious. This kind of cover photo can be so misleading that I would recommend avoiding it unless you find something that actually fits your personality  (ex: Portugal. The Man).
2.) Free Ad Space

Unless your Facebook page doubles as your professional space, there is no reason for you to waste your cover photo advertising your place of employment. It makes you look like a corporate sellout, someone whose identity is tied into your job. The job doesn’t make the man; the man makes the job. Your cover photo should let the world know who you are, not what you do. If people care enough to delve more into your life, they’ll creep harder.
3.) Animals

At least half the Internet is full of pictures of cats. Most of these are adorable and totally worthy of being turned into a cover photo. Especially if that cat is breading, in which case it should become an automatic cover photo candidate. Other animals are more hit or miss. When a potential boss checks out your Facebook profile, do you really want the first thing he sees to be a tarantula? If you’re going to use animals, make it cute. Chances are people will think it’s funny. If they don’t, that’s their loss.
4.) Memes/Sports Teams/Pop Culture References

I have no problems with these. When I went through my Hunger Games phase, my profile picture was a meme of Josh Hutcherson (who plays Peeta Mellark) with the caption, “Hunger Games Pick-Up Line #1: Hey Girl, I Know How To Handle My Frosting.” Stupid? Of course. But people immediately learned that I like The Hunger Games, I have a sense of humor and I’m probably single. The danger with cover photos like that is the knowledge you gain about the photo’s owner is only surface deep. You may now know that she likes Lady Gaga or he’s a big Chelsea fan, but you haven’t learned anything about his or her character.
5.) You With Friends

Your safest bet. Just a nice clean shot of you and a friend or two posed together looking like functioning members of society. Creepers will immediately know that you’re social and that you have at least the number of friends present in the picture. Just make sure it’s not a sloppy picture. If your eyes are bloodshot or you’re holding a beer bottle, that shouldn’t be on Facebook at all, let alone be considered for your cover photo. Oh, and this also requires you to have friends. If you don’t…well cats are cute, aren’t they?
Photo: at http://agbeat.com/real-estate-technology-new-media/50-more-facebook-timeline-cover-photos-for-inspiration/
FacebookTweet
Life

Previous Post:Copenhagen 2012: Wait, I Actually Have To Study?
Next Post:Yes, Slavery Still Exists And Louie Giglio Is Fighting To End It