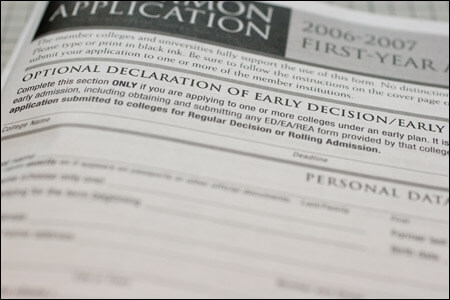 Applicants of Elmhurst College’s 2012-2013 school year will notice something a little different on their applications—they will have the option of answering, “Would you consider yourself a member of the L.G.B.T. community?”

Never has a university explicitly invited its applicants to share their gender identities or sexual orientations until now. One may wonder, “Why the change? Why does Elmhurst College (or any college for that matter) need to know?” Well for starters, the college doesn’t need to know; answering the question is optional. But more significantly, the question shares its purpose with similar demographic questions asked on applications regarding race, gender, or religion—the point is that this is an attempt at welcoming diversity.

When universities collect demographic data, the purpose is to encourage a welcoming and inclusive environment and to provide resources (clubs, centers, programs, etc.) for each represented group. Elmhurst claims the same justification for posing the optional question of sexual orientation.

And as an incentive to diversify the campus, applicants who identify as either lesbian, gay, bisexual, or transgendered may qualify for Enrichment scholarships that are offered to students who are particularly underrepresented at the college. The scholarship pays for a third of the tuition.

Additionally, as a private, Protestant institution affiliated with the United Church of Christ, Elmhurst College chose to inquire about its applicants’ sexual orientations to follow suit with the UCC’s mission of being “extravagantly welcoming” to people of all stripes. So often, people use religious arguments to condemn the L.G.B.T.Q. community; it’s a refreshing change to see people use religious arguments to support that community as well.

Although there are many, especially Elmhurst College students, who support the change and stand behind its declared motives, there are also some who disagree, and claim that asking if someone is LBGT in no way makes Elmhurst more accepting. In an article regarding Elmhurst’s change, Cheryl Waity of The DePaulia newspaper wonders if asking the LGBT question will actually make students feel more welcomed, concluding that it won’t if changes aren’t made regarding programming and resources as well.

What do YOU think? Is this a change you’d like to see in colleges nationwide?