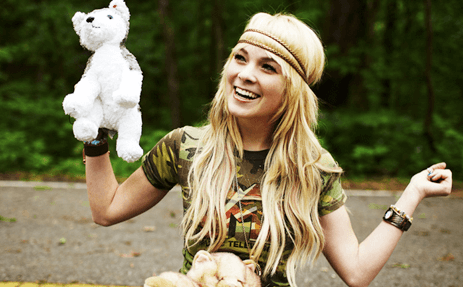 Maybe that’s why she’s the host of a show and network she so perfectly encapsulates.

Lenay Dunn hosts 10 on Top, a show counting down the most talked- and tweeted-about celebrity pop culture tidbits of the week, which airs Saturdays on MTV. On the show, Dunn talks about everything from Justin Bieber to Pretty Little Liars to an upcoming movie that’s “like Twilight with zombies.” She also co-hosts the show with celebrities like Annalynne McCord, Joe Jonas and Zac Efron, and previews upcoming celebrity projects and events.

Dunn was born in the Congo (her parents were missionaries), and only spoke a mixture of French and Lingala until she was about 4. After leaving her friend Hailey, a monkey who wore diapers, behind, Dunn was raised in Minnesota, and got her start in entertainment after Red Bull got a glimpse of YouTube videos Dunn and her friends made.

Although she was attending the University of Minnesota Duluth at the time, Red Bull pulled Dunn out of class and flew her around the country, as well as to Canada and Europe, to host extreme sporting shows, interview athletes and cover events.

However, Dunn didn’t let her star ambition, or an energy drink company, get in the way of her degree or college experience. Although she said she has always dreamt about being an entertainer, she knew she had to finish school.

“I just think it’s so important to have a degree in something,” Dunn said. “I totally think you should follow your dreams, but it’s so nice to have that degree on your belt.”

She credits her academic pursuits to her mom, whom she calls the “voice of reason.” Although her parents were “super cool,” “chill” and “laid back” when Dunn was in high school, her mom always made sure she was getting an education, while her dad was “very much the dreamer.”

That is not to say Dunn didn’t have her fair share of college experiences and shenanigans. She spent her last semester living with families in South America and only speaking Spanish. Dunn also recounted pranks at Minnesota involving missing mattresses, stolen snowboards and frozen fish, most of which also involved her college roommate and still-best friend Liz.

Although Dunn said hosting is “100 percent [her] main passion,” she also likes to do music on the side, and hopes to pursue a career in acting. She said the music scene in Nashville, where she lives during the week before flying to New York to host the show, is contagious, as is the fact that her husband is in a band.

“So far my performances have not left my living room,” Dunn said.

Although Dunn doesn’t have all the answers about her future, she does have some food for thought. When preparing for a nerve-wracking interview or appearance, she advises going over questions, getting lots of sleep and eating pancakes. “Pancakes are great brain food,” she said, adding that her mom would often make she and her friends pancakes in the morning after high school sleepovers.

And there’s really not anything she doesn’t want to try. Well, except to follow in her college roommate’s footsteps. “I want to do everything, except for be a chemical engineer.”

Previous Post:Column: A Major Journalistic Gaffe
Next Post:Not Worth The Fight