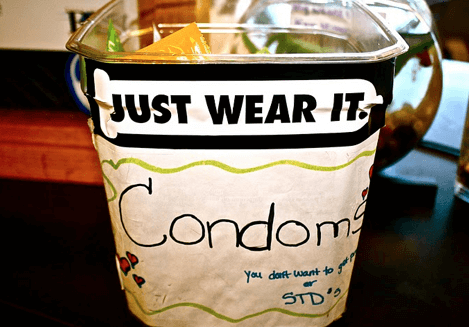 Nicole MartinFeb 27, 2011
Home » Latest Posts » DTF? Avoid the STD
FacebookTweet
DTF: a common college-lingo abbreviation for the phrase, “down to f**k,” that is often used in conversation about sexual experiences. While sex can be fun and interesting, there are three letters we should also be concerned about: STD.
According to Stanford University’s Sexual Health Peer Resource Center, an estimated one in four college students has a sexually transmitted disease.

But understandably so, the problem with STDs is that students are often too embarrassed to talk about them – or assume they’ll never become a victim of one. So College Magazine did the work for you: we consulted the experts to provide you with the information you need to protect yourself from becoming part of the statistic.


KNOW THE RISKS
To give students more knowledge on the subject and encourage dialogue, most colleges offer sexual education courses both in the course catalog and, often, free through campus resources. Take advantage of these – before you have sex, you should know what you’re getting into.  Did you know you can contract diseases in other means than just intercourse? Consult the health center on your campus for answers to any questions you have. That’s what they’re there for! Also, don’t be shy to discuss your experiences and findings with friends to gather more insight on these topics.

USE PROTECTION
It is the golden rule of having sex in college: wear a condom. It is the most common and seemingly a no-brainer, but it is most important in preventing the spreading of STDs. Remember that most birth control methods, such as diaphragms or the pill, may prevent pregnancy, but do not protect from STDs.

Don’t expect your partner to have a condom on them either. Carry an emergency condom with you just in case; you never know when you’ll become caught in the heat of the moment and, the last thing you’ll want is to have to ruin it because of lack of preparedness.

GET TESTED
If you are sexually active, it is best to get tested not just for your benefit but for your partner’s well-being. Colleges across the nation have free STD testing clinics on campus.

“I know it was a good decision when I got tested,” said Slippery Rock University student, Josh Desmond, “I mean what's the worst thing that could happen? They catch it at an early stage if you have something it may be treatable? Or you have nothing at all and your mind is at ease. It is better to know than to not.”

You may think it is unnecessary to get tested if you are showing no signs of an STD, but in actuality, you could have one and not know it. 70% of women with Chlamydia and Gonorrhea don’t show symptoms for years, according to the National Health Center, which can be very dangerous because both can result in infertility or in some cases, death.

If you feel embarrassed about the issue, there are plenty of confidential clinics that are more than willing to help. Don’t overlook what’s out there for you – the best way to prevent STDs is to understand the signs and risks.