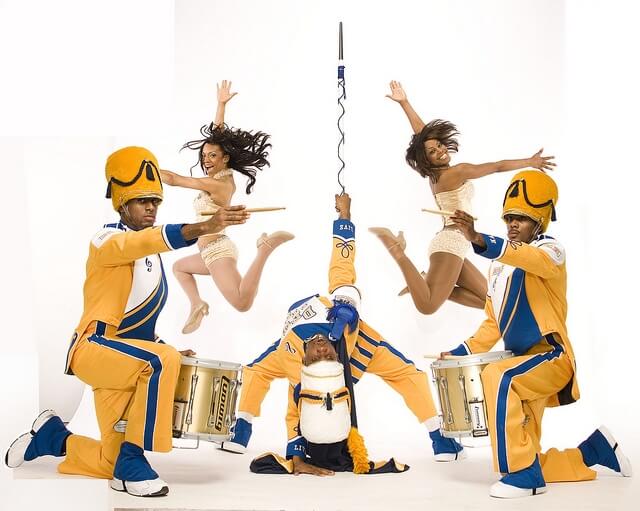 The 2002 romantic dramedy Drumline starring Nick Cannon and Zoe Saldana highlights the story of a young drummer, played by Cannon, from New York who becomes a member of the Atlanta A&T University drumline. There, he bumps heads with the school’s drum section leader and finds love with an upperclassman dancer, played by Saldana. The fictional school drum team was inspired by the real-life Southwest Dekalb High School Drumline of Decatur, GA.

This inspirational drumline has gone from small town to big screen and now to world tour. DRUMLine Live’s website says“the show-stopping new attraction created by the music team behind the hit move Drumline brings black marching band tradition to the theatrical stage for the very first time.”  The show takes a spin on the movie by putting talented theatrical drummers live in front of an audience on stage. Casting is even open to the public and more information about applying to go on the tour can be found on the tour’s website. The second part of DRUMLine Live’s world tour will take place in Japan this August, hitting cities such as Tokyo, Nishinomiya and Yokohama.

College students have taken a liking to the drumline tour.  Not only is it based on the popular college activity, but it also incorporates students into its cast. Two former Florida A&M University band students, Djuan Ballinger and Larry Smith, are touring with DRUMLine Live. According toTallahassee.com, Smith graduated in 2010 with a major in jazz studies and commercial music and Ballinger graduated in 2006 with a major in political science and minor in music. “I want to bring a new style of vibe to jazz, really change the image of jazz music and take it to a different level,” Smith told the website.

DRUMLine Live has been showcasing its talents on college campuses in the U.S. as well as abroad, hitting Indiana University this past November.  Students particularly enjoyed the “Midnight Magic” scene of the show where the drummers performed hip-hop music in neon clothing and black lights. “‘Midnight Magic’ was the best so far because it was different from the typical band performance, but really the whole thing’s great,” sophomore Indiana student Dan Russell told the university’s online newspaper Indiana Daily Student.

This theatrical drum show is entertaining young people in both the United States and throughout the world. It takes a popular college sport and turns it into a theatrical performance. For tour dates in the U.S. check the DRUMLine Live official website.