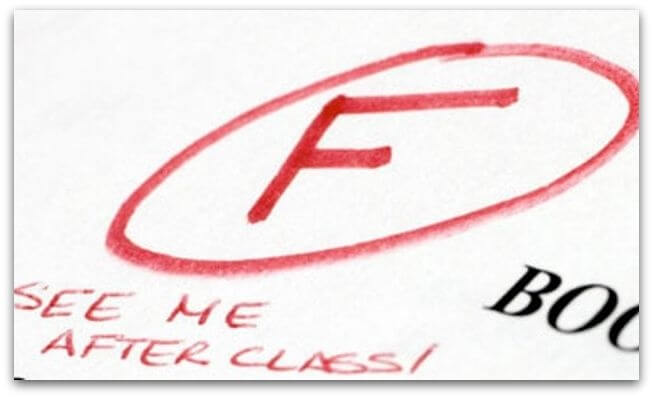 Failure: One of the most dreaded and feared words in any student’s vocabulary. Whether it’s failing a class, failing to find a job/internship, or even failing at making the most of your college experience, failure is like the plague. Alas, we need to face reality. As afraid as we may be of failing at anything it does happen to everyone.

Confession time. I’ve lived my entire life as a straight-A student (go ahead and hate me). Coming into an Ivy League school I knew that getting A’s would be ten times harder and I might have to settle for a B or two. When I logged into my online student portal in June and saw a fat juicy letter F next to my economics class my stomach fell down 10 flights of stairs.
An F? ME? No freaking way. I regret to inform you that this was not a nightmare. It really happened and it caught me completely off guard. My first thought? How in the world am I going to hide this from my parents? I could’ve said it wasn’t ENTIRELY my fault. Professors are the ones teaching the information after all. Regardless, I felt as though I had become less of a person and that I was the only one.
My biggest lesson? Double-majoring in economics probably isn’t the best idea for me. While the F did bring my GPA down quite a few points, it wasn’t the end of the world. I dropped econ as my second major and squashed any possible stock market dreams. Better find out sooner than later that your major (or second major) is not for you. Hopefully you don’t need to get an F to prove it.

Interviewers will not call you back. Employers will send you a big fat NO. Professors will hand you back tests with numbers you expect to see on a ruler. Failure happens and you aren’t alone. Take finding jobs for example, students are finding it harder than ever; it seems no one can catch a break.
Failure teaches you. It shapes you. It makes you a better person. One door closes and another or two or more open. We shouldn’t be afraid of failure, we should embrace it.
And if you really are afraid of failing at making the most of college, this will help.
Live. Love. Laugh. Fail. Learn. Great motto.
Image Source: http://www.fitsnews.com/2010/02/03/list-of-sc-failing-schools-released/
FacebookTweet
Life

Previous Post:Your Weekly Playlist From the Streets of Baltimore
Next Post:Some clubs don