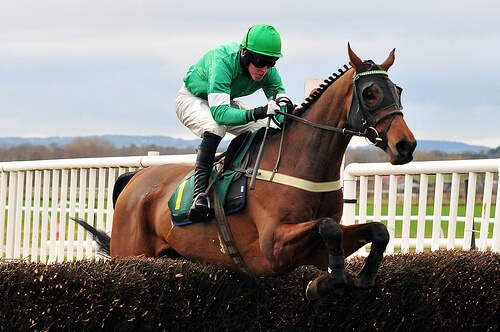 Does Anyone Care About Horse Racing Anymore?

The Kentucky Derby took place this weekend. Did you watch?

In a recent ESPN poll on the popularity of sports, horse racing finished a surprising seventh out of 20 sports. It’s surprising for a few reasons. One, it finished immediately behind all the major sports, including NFL, MLB, NBA, NH, and college football and basketball, so it comes up higher than every other minor sport. Two, it finished that high despite being an activity for people craving to get in a DeLorean and revert back 100 years to the days of Seabiscuit.

Call me crazy, but I don’t see horse racing becoming the “hip” trend in the youthful generations. Once a mainstay in the urban and working class culture during the Great Depression, it transformed itself into another interest the affluent could claim as their own. Now, the sport is fading, and it’s not because the rare breed of, no, not horses, or short and stout enough jockeys, but it is losing its popular appeal.

Sure, you see the Kentucky Derby, Preakness and Belmont Stakes on television, but what don’t you see on television? I could take a peek into the lives of the Kardashians and their perpetual struggle against society, if I so wanted to. If I can force myself to avoid that kind of amazing television drama, I just know horse racing would not came as close excitement-wise. But besides those three spectacles, what kind of attention does any other form of horse racing get? Zilch – and it’s due to a variety of reasons. Like I previously said, horse racing is not a team sport. In contrast to the major team sports, which are popular and feed off of regional or city pride to identify themselves, people are only going to root for horses or jockeys if they owe a couple thousand dollars to a loan shark standing behind them (possibly armed).

The solution? Make horse racing more like The Hunger Games – have a tribute from every state compete with other tributes in their region before the big show that determines a national winner. Throw in some tracker jackers and have the horses fight to the death, and then you’ll get an audience, PETA included.

Another reason for the sport’s decline is the length of the races. While it may satisfy our short attention spans for the entire event to end before we got bored by the prospect of laps, it sure doesn’t make good television, which fosters the growth of the sport and further attention. Who wants to watch hours of “experts” debating about the odds of individual horses winning when the actual action is compressed into two minutes. Hell, what if I’m cooking dinner and the pot is steaming? Looks like I’ll miss the race. What if I have to go to the bathroom at the most inopportune time of the broadcast? Whoops.

The solution would be to make longer races, but that will never happen because the horses would exhaust themselves. Maybe a better idea would be have the horses trot for miles and miles and see which horse lasts the longest before stopping to eat plates of food left on the side of the track as bait by competing gamblers. You wanted excitement? I don’t know what else would deliver more than that.

On a closing note, one thing horse racing does do that has surely got to continue is popularity is the drinking side. A day at the races, in addition to gambling, brings a horde of people drinking all day amidst the revelries. As long as tailgating is alive and well, horse racing will still have some appeal among our very cultured generation.