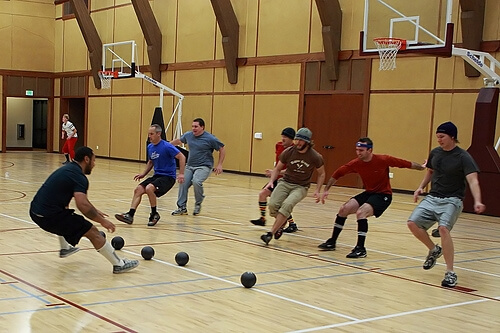 Dodgeball: No Longer A Gym-Class Game

In a high school gym class, the game of dodgeball is purely fun and games. The majority of the class, frankly, doesn’t take it seriously. There are a select few, however, who strive for excellence and glory of winning a dodgeball match by any means possible. Those student-athletes, if you will, continue their interest in the sport after high school by joining club dodgeball teams in college.

Using the 2004 film Dodgeball: A True Underdog Story as inspiration, college students that take part in club dodgeball compete with a certain attitude: to prove that dodgeball is not some immature gym-class game, but an art that requires elite athleticism, skill and teamwork.

Josh Posternock, a freshman dodgeball player at Rutgers University, offers a challenge to the critics against the growing popularity of the club sport: “Get a squad together and see me on the dodgeball court.”

This is a common response among club dodgeball players nationwide. The respect  hasn’t  existed until recently, with new leagues and teams cropping up all over the country, from Kent State University to James Madison University.

Posternock, along with a select few of his friends  from Moorestown High School, won the annual All-Night Dodgeball Tournament out of a 32-team field. Two of his teammates on that squad, The Human Centipede,  are pursuing dodgeball on the club level at the University of Maryland.

Greg DiCamillo and Matt Lewis both made the varsity club dodgeball team at Maryland as freshmen. They attribute their success as dodgeball players to the sports they played in high school. “I’ve played baseball all my life, so I would say it has helped me with my hand-eye coordination for throwing and catching”, Lewis said.

“Just from playing football and basketball with my friends has especially helped me catch balls that are thrown at any part of my body,” DiCamillo added.

Depending on one’s own abilities, there are four main types of dodgeball players on the court at a time, making up the various positions. There are throwers, catchers, dodgers and then the complete-package player that excels at all three. The latter, for example, was the kid who was always picked first in gym class — a coveted honor. Ideally, a championship dodgeball team consists of a plethora of complete packages.

Chris Via, the captain and founder of the club dodgeball team at Maryland, offers his opinion on the matter: “It would be best to have mostly uniform good all-around players and then have the rest be either players with great arms or great hands.”

Considering the limited availability of these “all-around players,” a successful team must find an equal variety of each talent. The catchers on a team specialize in entering opponents' rallies by catching multiple balls in a row to try and reverse their fortune. A caught ball results in both the opposing thrower to be ruled out and your teammate to come back into the game from the sidelines. The same catcher, usually known for his good hands but mediocre arm, hands the ball over to the stronger, more accurate throwers.

Dodgers, on the other hand, must have either a better than average arm (to throw), hands (to catch) or both. A dodger already has an advantage over the other team because he is both shifty and quick on his feet. However, dodging can only get a player so far. If he ends up being the sole member of his team left in the game, a dodger must be able to get someone from the other team out in some way – by either throwing or catching a ball.

While this is all true, sometimes the best catchers and throwers are not the quickest and shiftiest of players on the court. Thus, they are usually given their jobs by the captain in order to amplify their contributions to ensure a win for the team.

If you come away from reading this article with any knowledge of dodgeball at all, please remember this: the sport is not only just an intense and fun game from grade school to high school, but also a competitive and serious sport in college  for students all over the country.

Via noted that the sport was developed in Michigan, and that some of the strongest teams in the country are located there. But that doesn’t mean you have to go to college in the Wolverine State to play dodgeball; lead the way in starting a club dodgeball team at your college.

For all of you college students who miss pelting kids in the head, you’re not alone! Make your dream of playing dodgeball for another four years come true, just as Posternock, Lewis, DiCamillo and Via have done.

Previous Post:Create An Independent Study, And Have It Your Way
Next Post:There’s an App for That: New Year’s Resolutions