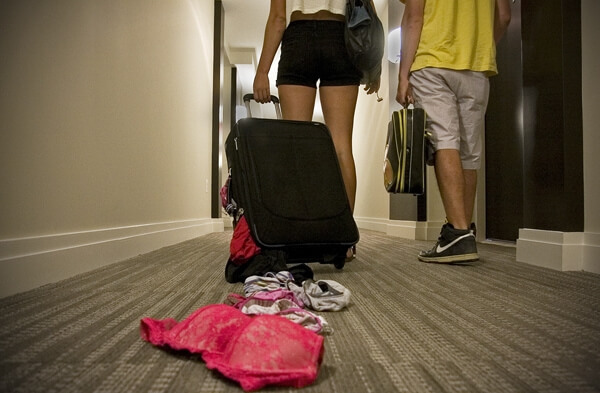 Traveling can be exhausting without throwing in romantic drama. Unfortunately, with tensions running high and vacationers breaking out of their normal routines, vacation can end up causing the perfect storm of emotions necessary for some seriously embarrassing dating tales to happen. College Magazine readers share their most embarrassing, hilarious, or just plain disastrous experiences while traveling.

“It was like two summers ago and I was staying with [my ex’s] parents at their lake house. Well, my ex's parents found out about us dating because he left this massive hickey on my neck and his dad called him Hoover-lips around me after that. We first tried to disguise it as, "Oh, we were playing paintball in the backyard!" and then his dad kept making these vacuum-related jokes around us until my ex finally caved and told them.”  –Luis Lazo, Brown University

“A friend and I went to Portugal for a weekend with two guys we were kind of into and thought at the very least it would be a fun time, maybe even a little romantic.  Things went wrong so quickly– our bus never came, almost missed our flight and arrived to find that our ‘4-person family apartment’ was actually just 4 twin beds in one small room! We tried to rally but instead, the guys drank far too much and before you knew it we were babysitting two grown men. They tried to jump in the ocean, spoke to French guys to attempt to trade us girls for [drugs]–luckily the French teens were laughing at them, although we were furious– accused us of being ‘secret lesbian lovers’ and then eventually got sick in the hotel room. The next morning, my friend and I were woken by one of the guys, still drunk, taking obnoxious pictures of us sleeping!” —Emma Smith*

“While abroad, this guy and I had been hooking up, and one night the condom broke. So I needed to get Plan B the next morning but you can't get Plan B in Jordan from anywhere but a hospital, and I couldn't go in as a single girl in a conservative Muslim country and just ask for it. The guy and I had to go and pretend we were married in order to get it–what a romantic morning!”  –Anna Baker*

“In my abroad program, boys aren't allowed in girls apartments and vice versa. Obviously there's no place to hook up if you can't visit their apartment—so I went over to the guy's place, and we had sex on this rickety, old twin bed, and the entire bottom part just broke off. The next day the guy had to tell his landlord, since the apartments came with furniture provided. The landlord kept asking how it had happened and fishing for why the bed would've broken, which was obviously a big secret 1) because it was embarrassing and 2) because we both could've gotten sent home for breaking the rule. That was the last time we hooked up.” –Kelly Calvin*, Colorado College

*Some names have been changed.