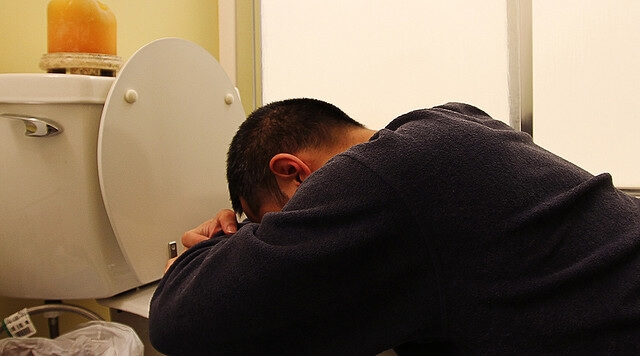 Diary of a Norovirus Survivor

Yesterday at 7:03 a.m., The Huffington Post released an article stating that 85 students at George Washington University in Washington, D.C. were "sickened by the norovirus this week": that’s the journalism way of saying a bunch of people got the stomach flu.

For an entire two weeks, I, in addition to a dozen other people I know of up here in Massachusetts, had fallen victim to that very ailment. My neighbor, University Health Services (who I’ve seen at least four times each semester for the past three years— yeah, I’m a klutz), recommended I go on the BRAT diet – sometimes referred to as the BRATTY diet. But what could BRAT[TY] possibly be?

At first I assumed it meant sit around on the couch, trash talk other gamers on XBox Live, complain about only getting 36 birthday gifts and make prank calls to neighbors back in Virginia (here’s looking at you, Mr. Bill), all while eating junk food. You know, everything a brat needs to survive.

After a day of that, it occurred to me that I may have the wrong BRAT[TY] diet in mind. The next day, I did a Google search on the interweb and found the actual BRAT[TY] diet: Bananas, Rice, Applesauce, Toast [and then Tea and Yogurt if you want to broaden your options]. Heed my advice: eating anything that isn’t listed above, with the exception of chicken broth, will turn your gastrointestinal tract into a ticking time bomb of…well, you get my drift.

And so I hopped onto the bus to the nearby mall, somewhat afraid I might spontaneously go poo-poo in my pants. Unfortunately for me, I’d had a full breakfast that morning, including an omelet comprised of jalapeno peppers, green peppers, black pepper…you know, everything you’re not supposed to eat when suffering from the stomach flu. Or even at breakfast, for that matter.

Thankfully, I made it there and back just fine. As for what I picked up at Target: 15 cans of Campbell’s chicken noodle soup, a few bottles of Gatorade, Mott’s applesauce, and season three of Breaking Bad.

Back at my dorm, I felt the full effects of my Mexican omelet. Let me tell you, it wasn’t pretty. Once I was in the clear, I spent the rest of my afternoon drinking can after can of CNS (chicken noodle soup – I’d been drinking so much of it, we were on a nickname basis), playing FIFA 12, replenishing my fluids and electrolytes via Gatorade and getting plenty of rest. Between all of these and the bathroom, I hardly had any time for classes. Apparently we still have to go to those in college?

Now in case you haven’t been paying attention, I’ll recap what to do if you think you have the norovirus:

Now it doesn’t take a rocket surgeon to figure out that a lot of sharing goes on around campus: food, notes, spit, beds, answers on exams, you name it.  In fact, that’s probably how the norovirus spread up the east coast. Short story long? Sharing doesn’t mean caring…it means germs!